Shares of ZNC traded at AU$0.34 on 10 March 2022. Backed by action-packed exploration program across portfolio projects, ZNC shares have surged over 36% since the beginning of 2022. The company’s 52-week return stands at more than 180%.

Zenith Minerals revealed that the latest drill results have led to the expansion of its Tonka-Navajoh Prospect mineralised footprint to a massive 8km x 1.4km strike. Furthermore, the mineralisation is interpreted to remain open along strike and down dip.

The continuity of the high-grade Chinook-Tonka-Navajoh mineralisation is now inferred to extend over the 18km strike at the Earaheedy Zinc Joint Venture project. Zenith owns a 25% free carried interest in the JV project, while Rumble owns the remaining 75% stake. Around 15% of the assay results of the 50,000m drill program undertaken in 2021 are still pending. 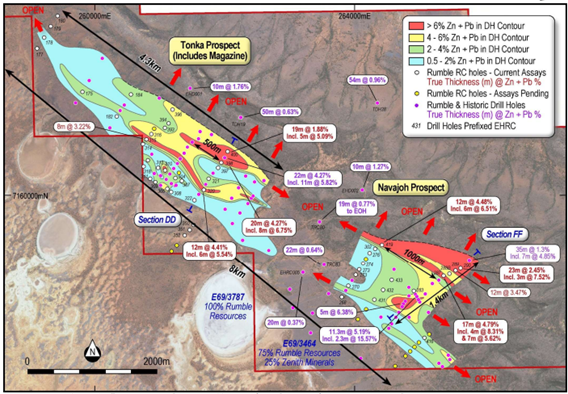 “We are very excited to be able to report on these new drill results. The results infer we have the likelihood of continuous zinc-lead mineralisation extending from Chinook in the northwest, all the way through to Tonka-Navajoh in the southeast, a distance of some 18km. We can now see the scale of the system being uncovered, a very exciting development, especially as we see the price of zinc surging through A$5,600/tonne.”

In April 2021, the JV partners realised the Earaheedy Project as a major Zinc-Lead Discovery with ‘Tier 1’ potential. As of now, there are three main prospects including Chinook and its associated high-grade feeder zone Kalitan, Tonka and Navajoh at the Earaheedy project

Tonka discovery – A Zn-Pb-Ag mineralisation at Tonka was discovered during an exploration drilling program at the joint venture ground.