Shares of BPH Energy Limited (ASX:BPH) traded ~15 per cent higher at A$0.110 mid-day on 26 March 2021 following the release of a significant update related to investee Cortical Dynamics Limited. The momentum continued mid-day on 29 March 2021, with the shares up ~5 per cent, trading at A$0.10. 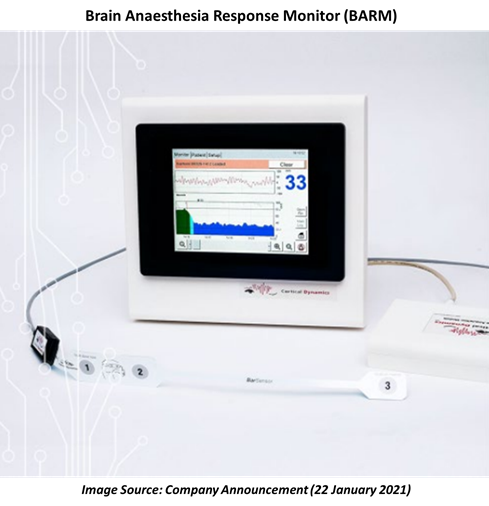 BARMTM System is the core product of Cortical that has been developed with the aim of better detecting the impact of anaesthetic agents on brain activity, supporting anaesthetists in keeping patients anaesthetised in an optimal way.

What is Medical Device Partnering Program?

The MDPP is supported by the Marshall Liberal Government via the Department for Innovation and Skills. The program is endorsed nationally via A$32 million MTPConnect’s REDI initiative (enabled by the Medical Research Future Fund).

The MDPP is led by Professor Karen Reynolds and holds a robust track record of research excellence as well as commercialisation experience. The program utilises the capacity of their research group, the Medical Device Research Institute.

The MDPP is an Ideas Incubator, which promotes partnerships across industry and government, transforming ideas into proven concepts and connecting the MedTech ecosystem.

Cortical’s update underlines that the Ideas Incubator offers successful applicants with 250 hours of R&D (research and development) support, in addition to 30 hours of market intelligence, advancing products in the medical device development pipeline.

All prototypes, data, results, and any generated intellectual property are released unfettered to the applicant at the end of the project, along with future steps needed to commercialise the device. The  collaboration will concentrate on additional analysis of the Cortical Input component (pain/ CI) of the inventive BARM™ technology.

In its recently released half-yearly report, BPH highlighted that Cortical had started the FDA 510K filing process for BARMTM in the United States, backed by strategic investor Intuitive X.

The FDA is the federal agency of the US Department of Health and Human Services that regulates the distribution of medical device products (comprising diagnostic tests) in the United States besides monitoring the safety of every regulated medical product.

The approval from the FDA is a necessary precursor to initiate sales of BARMTM in the United States. BPH investee has achieved TGA (AU) as well as CE (Europe) registration. In December last year, Cortical also received approval from the South Korean regulator, The Korean Ministry for Food and Drug Safety, to sell its BARMTM in the South Korean Market.