Shree Minerals Limited (ASX:SHH) continues to achieve significant milestones on its portfolio across prolific mining regions with a vision to create the shareholders' value via accelerated exploration and development activities.

Recently, the gold and iron ore-focused miner released its quarterly report for the period ending 30 September 2021, outlining the significant progress across all the portfolio projects. Let’s have a glance through recent operational activities of each project to get insights into progress made by the company.

Shree has submitted an updated DPEMP to the Environmental Protection Agency (EPA), Tasmania, for the Nelson Bay River’s Direct Shipping Ore (DSO) project during the quarter. Recently, the company announced that the DPEMP for the Direct Shipping Ore project has been accepted by the Tasmanian EPA for public consultation.

The updated draft is in line with the comments received from EPA in June 2021 on the previous draft DPEMP. Furthermore, in October, the company updated that the EPA had advised the Circular Head Council to advertise permit applications and call for public representations.

Shree gears up for RC drilling at Rock Lodge 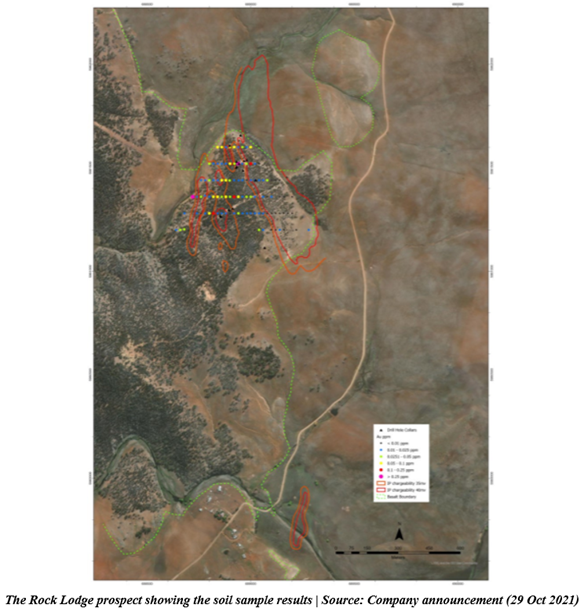 The results of the soil sampling program also correlate well with the 17 rock chip samples collected during August. One of the samples of the gossanous sediment near old workings returned grades up to 7.3g/t Au with 6049ppm As and 446ppm Bi.

Additionally, the miner has also inked a land access agreement with the landholder, and the NSW Department of Planning, Industry, and Environment has given approval for drilling.

Recently, Shree shared its plans to undertake an RC drilling program to test a gold anomaly generated by the soil sampling and rock chip sampling programs. Shree has already secured approval for the drilling program and anticipates commencing the RC drill program in mid-November 2021.

Most recently, Shree announced that the review of the Dundas project had outlined lithium pegmatite potential. Previously intersected pegmatites have not been assayed for lithium. In fact, the Dundas project is located along the strike from the Anna Lithium Resource. 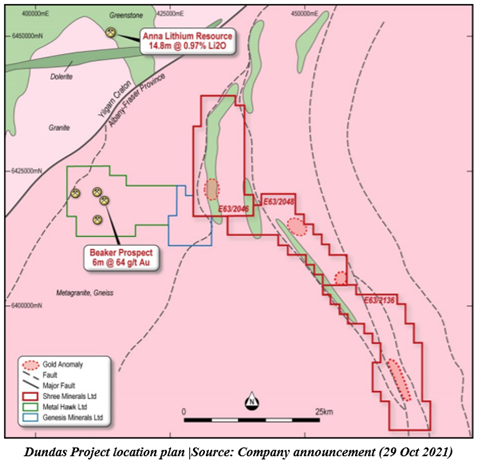 Shree has also planned an auger soil sampling and RAB drilling program at the Dundas Project site based on the review results that have identified potential lithium-bearing pegmatites in addition to gold mineralisation at the location.

The soil sampling and drilling program is designed to test the gold potential of greenstone belts and the lithium potential of pegmatites.

A sampling at Edward Creek

SHH has conducted a reconnaissance trip to the Edward Creek tenement to check and assess previous geological mapping and also, undertake a gold and base metal sampling program. Shree has already collected 16 rock chip samples which were submitted to a laboratory for gold, copper, and multi-element geochemical analysis. 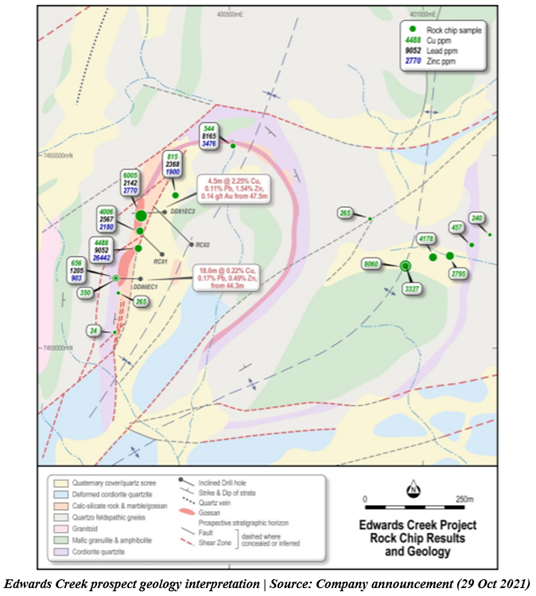 The site visit has confirmed the presence of base metal and copper at the Edwards Creek gossan and the extensions to the north and south.

SHH has undertaken a reconnaissance mapping of quartz vein and workings in May 2021 at the Bruce Gold Prospect. The Company has also taken 18 rock chip samples along with the gold mineralisation trend and submitted them to the laboratory for multi-element and gold analysis. 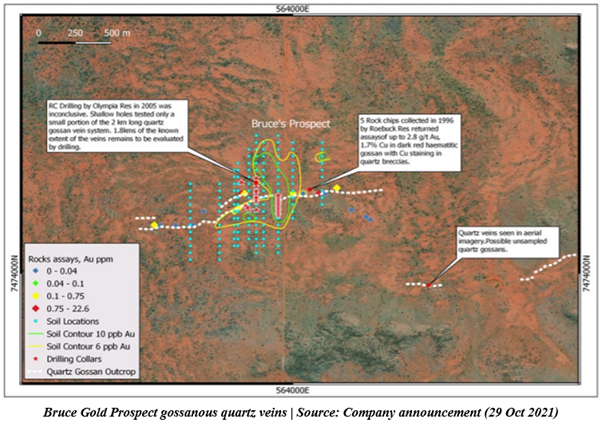 The sampling at the site has confirmed high gold values which could be the result of coarse gold or could be caused due to natural variability in the quartz vein.

Shree in July 2021 inked a research agreement with CSIRO to assist with exploration targeting at the Box Hole Project, located in the Northern Territory. The project is intended to support building a 3D model of the prospect.

Shree has conducted a review of geological, geophysical, and geochemical data sets over the Kookynie West project area, which has revealed similarities with the geological setting of mineralisation at the Genesis Metals Ulysees Gold project. 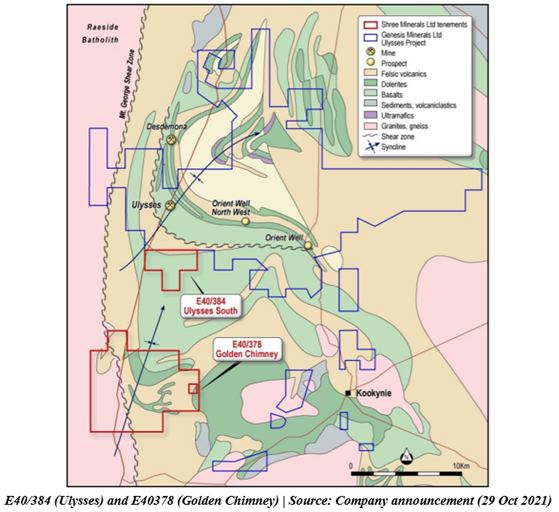 In terms of corporate activities, the Company has paid a total sum of US$133,500 to related parties and their associates. Shree has spent AU$116,799 towards Exploration and Evaluation Expenditure and AU$85,040 towards mining development activities during the quarter.

Shree Minerals continues to progress across its portfolio projects on the back of the accelerated exploration and development activities undertaken by the company.