As part of the underground drilling, a new mineralised area situated about 1km from the central zone of San Jose has been successfully drill-tested, suggesting a substantial step-out target. The mineralised area indicates prior under-explored mineralised systems in between hold discovery potential. 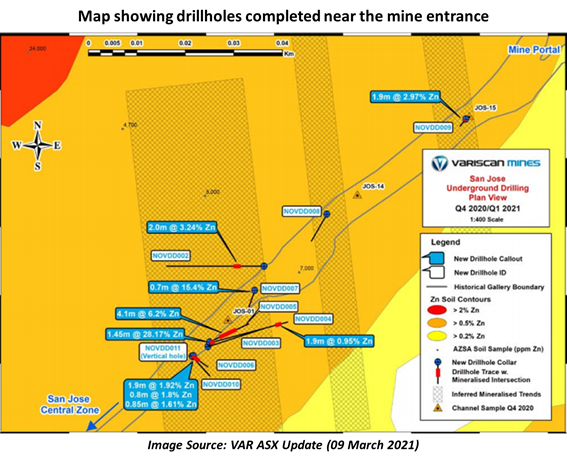 The latest assay results hint that the known mineralised systems possibly have extensions and deserves further exploration work. Furthermore, the results validate the identification of mineralisation near N-S trends, with potential for E-W cross cutting trends and extensions.

The mineralisation style from the drill core is in accordance with sulphide-rich carbonate hosted lenses (Mississippi Valley Type) recorded in the stopes of the central zone of the San Jose Mine. Besides being easily accessible, this area has observed very little historical mining activity.

Variscan highlighted that this area has the potential for mineralisation to be extended, coupled with positive historical surface drilling data. 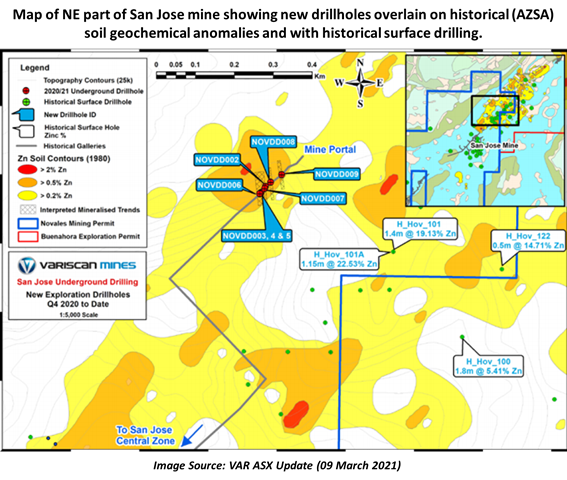 Variscan notified that a second drill rig has been mobilised while constructively working with its local Spanish drilling contractor. This drill rig is already operational, with further news-flow expected in the near-term. The Company believes that this will remarkably accelerate drilling meterage achieved, subject to equipment serviceability.

Do Not Miss: Variscan Mines (ASX:VAR) Embarks on ~2,000m Drilling Programme at San-Jose Novales Mine

With a clear plan in hand, the Company intends to drill for the coming five weeks to achieve about 1,000m, drill-testing the southwest and central zones of the San Jose Mine. This drilling focuses on areas showing mineralisation that have never been mined in the past. In particular, the southwestern areas are deemed to be highly prospective and demonstrate discovery potential.

Next Course of Action

The Company will submit the next batch of drill core samples for assay analysis shortly.