VAR has a market capitalisation of AU$13.20 million and has been actively undertaking key exploration programs across the prospective portfolio while receiving encouraging results.

Lately, VAR has made a significant discovery at the Central Zone of the San Jose Mine. The Company has discovered zinc-rich mineralised lenses beneath the areas of recognised mining work in two distinct north-south trends.

High-grade zinc mineralisation was intersected over and beneath the mine stopes at the Central Zone of the mine through underground drilling.

Furthermore, several horizons with mineralisation occurring as a series of vertically stacked, flat-lying lenses, consistent with the normally stratiform-stratabound feature of sulphide orebodies in MVT Pb-Zn districts, have been identified.

VAR has undertaken drill-testing at the La Caseta Trend towards the southward extension, where core logging offered several indications of visual high-grade zinc mineralisation. Additional core samples from 20 drillholes have been submitted to ALS for assay testing and the Company is yet to receive these results. 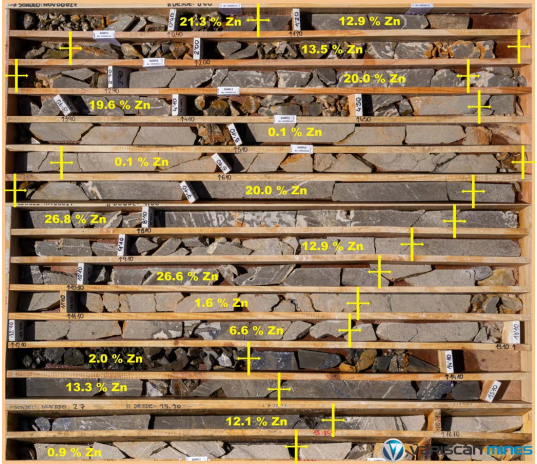 The Company has concluded diamond drilling in the Central Zone and has also concluded drilling in South West Zone while assays are pending. VAR has drilled a total of 73 drillholes for 2,087 metres during this campaign to date.

Do Not Miss: Variscan Mines (ASX:VAR) Embarks on ~2,000m Drilling Programme at San-Jose Novales Mine

VAR believes that there is potential for high-grade mineralisation extending beneath the former producing mine. This further exposes VAR to an excellent scale opportunity, as a large part of the mine has not witnessed drill-testing at depth.

VAR’s immediate focus is on continuing with the various key activities across the project, including the following:

All in all, a major part of the mine remains untested at depth and offers possibility for further discoveries of high-grade mineralised lenses, the proximity of which helps in expanding cumulative tonnage.