Shares of QXR jumped 8.33% in response to the promising announcement to trade at AU$0.013 a share on 29 September 2021 with a market capitalisation of AU$8.66 million.

Silicified veins discovered in all trenches

Earlier in September, the company had announced the commencement of an extensive trenching program at the Disney tenement, which included the Big Red and the Red Dog gold prospects.

The trenching program discovered 0.5 to 4m-wide silicified (quartz) veins in all trenches. The infill soil and rock chip sampling program had collected over 250 samples on the Big Red area, which led to the delineation of a massive 675m mineralised trend southwest across the Red Dog anomaly. 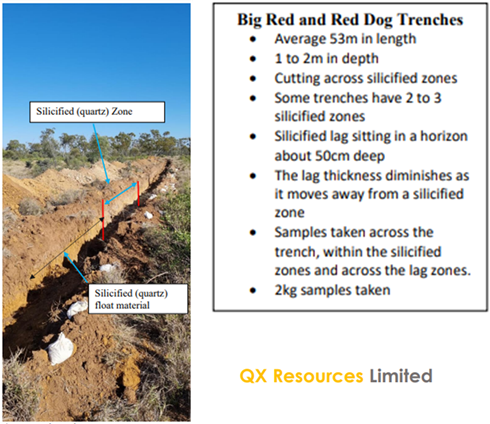 QX has already completed seven trenches with an average length of 53m and 1 to 2m deep at the Big Red and the Red Dog prospects. The remaining results of the trenching program will be used to design a shallow reverse circulation (RC) drilling program. In accordance with the Landholder Agreements, all trenches were filled and fully rehabilitated.

Additionally, QX has also completed two trenches, north of the Lucky Break pit and directly on top of the drill target where QX had intersected the northern extension of the Lucky Break Lode. As many as 400 samples have been submitted to ALS Geochemistry in Townsville for assaying. The assay results are anticipated to be received within the next six weeks.

QX has been ramping up exploration efforts across highly prospective projects that includes two historical gold mines, Lucky Break and Belyando, and holds further exploration upside along strike and beneath the historical mining deposit.

Currently, QX has been undertaking exploration program at the Clermont Goldfields project concurrent with the ongoing program at the advanced stage Anthony molybdenum deposit. As per the latest update, QX anticipates completing the gravity beneficiation and leach extraction test work at the molybdenum project by the end of 2021.

Recently, QX’s wholly owned subsidiary, World Metals, had acquired a 50% stake in two exploration licences prospective for gold, nickel and base metals in the Pilbara region. Together with the aggressive exploration and development work programs, QX strategises to build a strong portfolio of highly prospective exploration leases, where it can unlock value through exploration, sale or equity exchange.