Troy Resources (ASX:TRY) to Develop Smarts Underground as the Primary Source of Production

Troy Resources Limited (ASX:TRY) has updated the market with its operational activities for the month of April. The Company reported a gold production of 2,140 ounces in April and has also provided a production forecast figure of 2,400 ounces for the current month of May and 1,909 ounces for the next month.

Recent update: A golden March quarter for Troy Resources: Gold production up by 75%

Troy operates the Karouni Gold Project in Guyana. The project area has several mines, which are at different stages of development. For the last 15 months, most of the mining activity is concentrated on Hicks 4 open-cut mine. After a careful evaluation, Troy derived that the ore-grade material will be exhausted from Hicks 4 by mid-June or early July 2021. Another open-cut mine, Spearpoint, has already started supplying mined materials.

Smarts Underground: The next centre of mining activities for Troy

Located adjacent to the Karouni Mill, Smarts Underground has shown the potential to become the most valuable asset for the Company. During the drilling campaigns of 2020 and 2021, significant gold intercepts were received, which beefed up the confidence in the prospect.

The Company is strategically enhancing its landholding adjacent to the Karouni Project and in the last six to eight months, has roped in nearly 3,000 hectares in its tenement inventory. 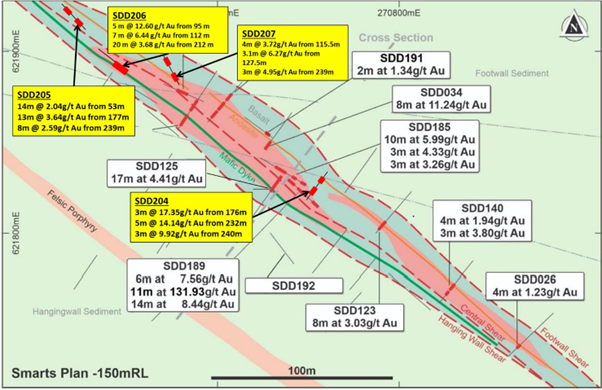 Troy is working on the Pre-Feasibility Study (PFS) and determining Ore Reserves. The results for the same are expected to be announced shortly. Troy has already applied for required regulatory permits for the upcoming mining operations. Since it will be the first underground mining project in the entire country, the mining department, GGMC, is taking its time for approval as the department does not have prior experience in underground mining.

Once Hicks 4 and Spearpoint cease production, Troy can get one month’s additional production from its Goldstar Prospect. Troy has evaluated the Ore Reserve of the prospect to be approximately 74,000 tonnes @ 1.2g/t Au for approximately 2,600 ounces.

After Goldstar, the Company will move to Smarts Underground, but the prospect will come online only in late 2021. The time period between Goldstar ceases production to Smart Underground starts sending mill feed will witness a production halt for a brief period of time. Troy will use the shut-down period for maintenance and repair work before going for full-fledged operations on Smarts Underground.

In a bid to increase its gold footprint in Guyana, Troy has acquired a tenement package, nearly 20 km to the south of the Karouni Mill. The newly secured tenement, Potaro target, had been on the cart of Troy for the last two years. 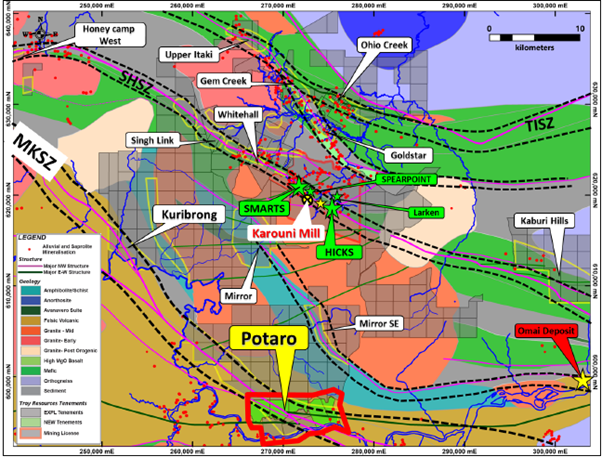 The Makaba Kuribrong Shear Zone (MKSZ) is interpreted to be underlain the Potaro target and considered to be highly prospective for gold. Troy had undertaken initial mapping and reconnaissance work on the Potaro. The aeromagnetic survey shows the entire tenement area is covered with sand and lies in a crustal fault zone.

Troy will employ gridded drilling due to sand coverage to evaluate the area and plan for further exploration works based on drilling data.

Troy secured an extension of Maturity of Gold Loan Facility

Troy has reached an agreement with Asian Investment Management Services Ltd (AIMS) to extend the deadline for the maturity date of its gold loan. Now the loan facility will mature on 16 June 2023, providing 17 months of extra time period for repayment.

The extension comes at a crucial time, when the Company will be in a position to monetise its Smarts Underground prospect and will be able to repay the principal amount of the loan. As a part of the extension agreement, no fee will be charged on AIMS.