In its constant effort to bolster gold production and resources on its flagship Karouni Gold Project, Troy Resources Limited (ASX:TRY) is going strength to strength on the project. The Company has shared the results of the RC drilling campaign on the Gem Creek prospect, lying 10km to the north of the Karouni Mill. 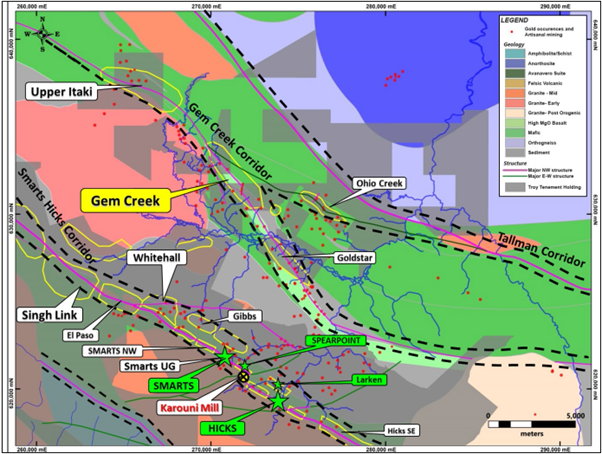 Troy has undertaken extensive drilling campaigns on its brownfield and greenfield prospects on the project since mid-2020. The Company drilled 160 RC holes over the 6km strike extent on the Goldstar-Gem Creek corridor.

The drilling has delineated numerous zones of relatively good grades of mineralisation on the prospect. Core analysis indicates felsic intrusion on the contact of the older mafic volcanics with younger sediments.  Mineralised throughout, the felsic interval has higher grade at places of higher alterations.

Troy’s recent follow-up RC drilling campaign on the prospect has been conducted with an objective to intersect the upper contact between the mafic volcanic to the volcanoclastic unit and the younger sediments. A total of 44 holes along 13 drill lines, along the strike length of 700m were drilled.

Troy has received assay results for 36 holes to date. Some of the significant intercepts are:

Gold mineralisation on the prospect has been identified along a 500m strike with a north-south orientation and remains open on both north and south as well as at depth. At Gem Creek, mineralisation occurs mainly in two subparallel zones, which are 5-15m apart. 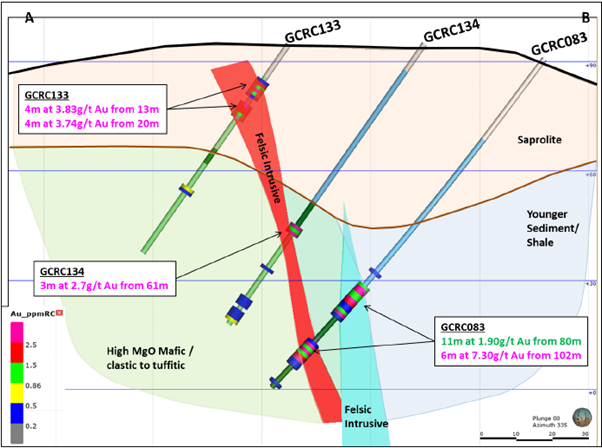 Hailing the RC drill results as encouraging, Mr Ken Nilsson, Managing Director of Troy Resources, said that at Gem Creek, mineralisation was controlled by the presence of felsic intrusion host and was more consistent over increased width. He concluded that Gem Creek carries the potential to represent a more robust system with 500m of mineralised strike length already established.

“Whilst the grades we have received are not variously spectacular as for, say, Ohio Creek, we have seen at such prospects that establishing a mineable ore body from gold occurring predominantly in quartz veins (nugget effect) is problematic,” Mr Nilsson commented further.