South America-focused gold explorer and developer Troy Resources Limited (ASX:TRY) has shared an update on gold production from its flagship Karouni Gold Project for the June quarter. Troy was successful in extracting 4,919 ounces of gold during the quarter amidst heavy rainfall and flooding in Guyana. The havoc was so severe that the Guyanese Government had to declare a State of Disaster on 10 June 2021 throughout the country. 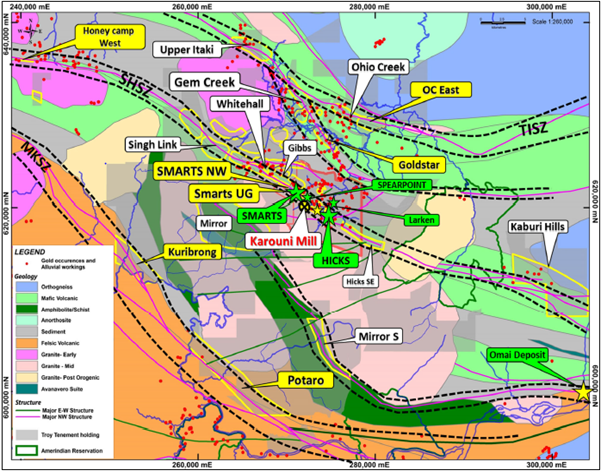 Mining activities on the project were hampered since mid-May due to rain. Therefore, the June quarter saw effective mining only for a period of nearly one-and-a-half months. The total material mined during the quarter was 334,939 tonnes – more than 57% of which was mined in April when the weather was not adverse.

The average grade of gold was 0.91 for the quarter. The mining and production details are shared in the table below:

Smarts Underground: Next source of ore

Troy had earlier informed that its primary ore sources, Hicks 4, Spearpoint and Goldstar mines, had stopped producing as they were exhausted of higher-grade ores. To replace them, the Company is advancing on the development of Smarts Underground.

Smarts Underground will become the primary source of mill feed in the coming months. Smarts Underground has a Mineral Resource of 3 Mt @ 3.3g/t Au for 290,000 ounces of gold. Also, the development of the mine will take place in two stages.

The first stage will involve a relatively short drive of 800m to reach the first ore zone. This will allow the extraction of nearly 30,000 ounces of gold. The revenue generated from the gold sales would be utilised for the second stage of development, thus reducing the initial capital requirement on the project.

Troy will utilise the time till Smarts Underground starts production to take care of the maintenance work on the project.