Diversified minerals exploration and development company Surefire Resources NL (ASX:SRN) has announced an update on the ongoing exploration activities and shared its plans to re-commence follow-up drilling at the Yidby Gold Deposit on 1 September 2021.

The explorer has also given the lowdown on the ongoing Aerial Drone Survey and announced the completion of the ~528-sample soil geochemical survey. 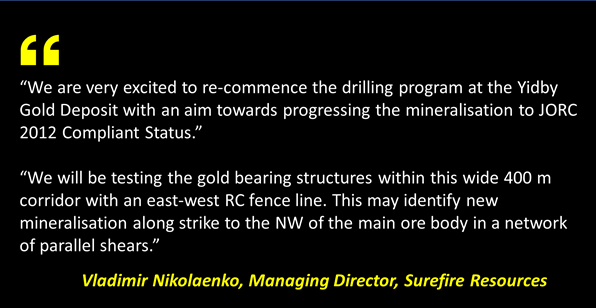 Exploration plans and progress at Yidby

2,000m drilling campaign - The Reverse Circulation (RC) drill programme will span 15 holes aggregating to a meterage of over 2,000m and will further test the prospect along strike and down dip extensions. The follow-up drilling will include an east-west line intersecting a Mobile Metal Ions (MMI) Soil Geochemical Anomaly, which coincides with an array of interpreted cross faults and splays off the main Yidby Cryptic Fault.

The structural interpretation of the Yidby gold deposit delineated the Cryptic Faults and associated second order structures, which control the gold mineralisation within the deformed Anticline host rock. 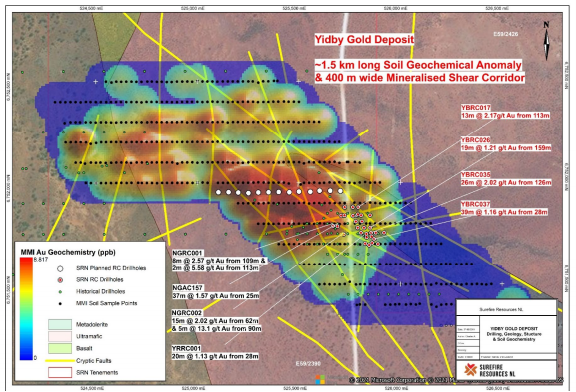 Read Here: Surefire Resources Aims To Up The Ante at Gold Projects

Aerial Drone Survey - Surefire has involved Arvista Aerial & Terrestrial Surveying Services, a leading provider of aerial surveying services to the mining industry, to undertake an Aerial Drone Survey and is anticipated to complete it by 15th September at the Yidby Gold Deposit and its surrounding targets. The survey will gather and aggregate the photogrammetry and digital terrain model (DTM) data, which will be used for 3D modelling of a JORC 2012 mineral resource at Yidby.

Soil Geochemical Survey - Surefire also announced the completion of a ~528-sample soil geochemical survey along strike from Yidby to test the contact area of sheared BIF/Ultramafic formations. The assay results can be expected in the upcoming 6-8 weeks, subject to laboratory backlogs.

Surefire strives to make the most of the time and will resume the drilling shortly with an aim to extend the Yidby Road gold mineralisation. The company has been ramping up exploration efforts at Yidby, in addition to undertaking multiple critical activities to enhance the prospectivity of the gold project.