In an upbeat market update, Surefire Resources NL (ASX:SRN) has announced the delineation of a potentially large intrusive related silver-lead to copper-gold system along the strike of the extremely high-grade Kooline silver-lead-copper Project.

The Kooline project stretches over 328 km² area in in the Ashburton region and includes almost entirely the 50 km strike corridor. The strike corridor connects the high-grade lead-silver workings at the Kooline mining centre, which includes over 30 historical mines, other lead-silver, copper-gold and gold historic mine and workings. 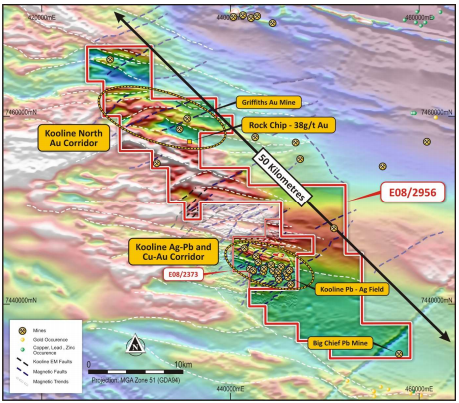 The previous rock chip sampling program on the outcropping lode structures resulted in grades of up to 55.3% Pb and 249 g/t Ag at the Bilrose workings and copper grades up to 2.62% Cu (12% Pb) at the Phar Lap workings in the western section of the Mineral Field.

The VTEM survey was conducted in 2006, on north-south oriented, 250m spaced lines on over 117 km² of area. The survey was conducted on the entire E59/2390 area and also extended northwest into E59/2956. The imagery produced by SGC outlines ‘early time’ (shallow) conductivity and ‘late time’ channels with information on stronger and deeper conductors.

The modelled conductors are believed to have defined the margins of two intrusive bodies. The conductors on the south-eastern section of the intrusive corridor correlate with the projected extensions of the high-grade Ag-Pb lodes and associated workings at the Kooline mining centre, intensifying to the northwest, in the vicinity of the interpreted intrusive body.

The higher copper grades in mine workings in the proximity to the intrusive system indicate that the conductors are associated with the increasing copper-gold sulphides close to the interpreted intrusive heat source.

READ HERE: Surefire Resources Aims To Up The Ante at Gold Projects

The priority target area includes five conductors within a 2km x 2km area, along the strike from the Kooline high-grade Ag-Pb workings. The VTEM targets are unexplored, and an array of deep pre-collared diamond drilling has been planned. 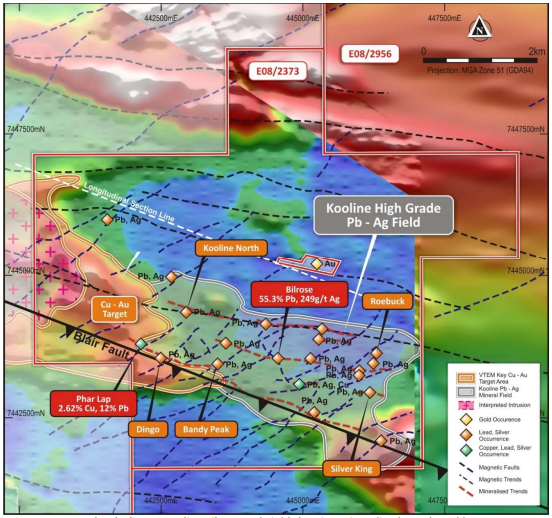 Further, the drilling campaign has been approved and will be co-funded under the WA Government’s Exploration Incentive Scheme (EIS) up to a sum of AU$150,000 towards direct drilling costs. The drilling program will target the high-grade extensions of the Ag-Pb lode structures and the copper-gold mineralisation near the interpreted intrusions. The re-processing and interpretation of the aeromagnetic imagery has been completed for the entire Kooline project area.

The Ag-Pb field at Kooline represents a magnetic low surrounded by WNW trending structures, parallel to the structural “grain” and multiple cross cutting SW – NE trending structures.  The corridor of Pb-Ag workings projects to the northwest into the key target area of VTEM conductors located on the margins of the interpreted intrusive body. These conductors are usually more magnetic.

Further, another corridor in Kooline North represents a bend in the projection of the crustal-scale Baring Downs Fault that includes numerous splays. The gold workings include the historical mining centres at True Grit and Sunken Treasure along the trend and extend into the Kooline Project tenements. 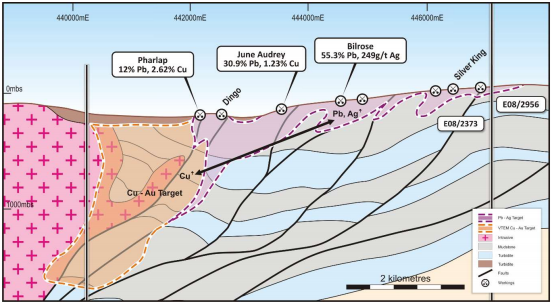 The southern extent of the corridor includes an array of sub-cropping, east-west trending quartz-carbonate veins, which had previously been mapped and sampled by Golden Deeps Ltd in 1980s. A quartz vein resulted in grades of 38 g/t Au (repeat 31 g/t Au) with 450 ppm, as in the rock chip fire assay results. The quartz vein strikes along a length of over 250m and projects in a prospective area that is mostly untested.

The Kooline North area has been identified as a key target area with the potential for high-grade orogenic gold deposits, like the 1 Moz Paulsens deposit, located north of the Kooline tenements.

The high-grade vein targets will be tested during the aircore drilling, which is being planned now.