High Purity Alumina developer FYI Resources Limited (ASX:FYI) will commence trading on the US-based OTCQX market from 15th April 2021 under the stock code ‘OTCQX: FYIRF’. FYI has recently informed that its application to join the OTCQX market has been accepted, allowing it to trade in the US.

Buoyed by the key update, FYI shares rallied by ~8 per cent to AUD 0.610 during the early trading session.

The Company will retain its primary listing on the ASX, with the OTCQX market as secondary or a compliance listing. Operated by OTC Markets Group, the OTCQX represents the highest tier in the OTC markets. Furthermore, OTCQX promotes high financial standards and advocates ‘best practice’ corporate governance & statutory compliance.

Read More at FYI Resources (ASX:FYI) gears up to get listed on US OTC market

Home Exchange reporting-being the Company’s ASX obligations, satisfies the requirements of OTCQX and disseminates across the US without any further compliance requirements.

What is the Significance of US Listing?

FYI Resources believes that trading on the OTCQX will boost its accessibility and visibility to the burgeoning market of North America, teeming with high net worth, retail, and institutional investors. The Company further highlighted some key advantages for North American investors, as stated below:

FYI’s US listing is in response to a surge in the US investor interest in the Company’s fully integrated and innovative flowsheet design that delivers:

Recently, FYI released an updated Definitive Feasibility Study (DFS) of its HPA project, which revealed exciting financial metrics, as demonstrated in the table below: 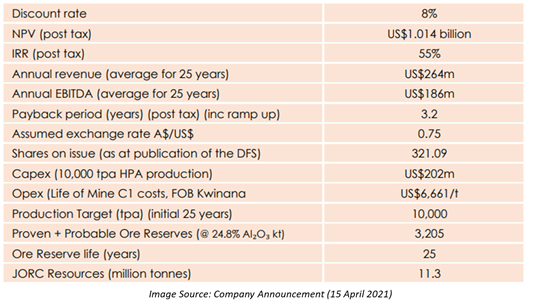 What Lies Ahead for FYI?

The Company is in the process of seeking eligibility from the US-based financial services firm, Depository Trust and Clearing Corporation (DTC). However, this process is independent of trading on the OTCQX market.

Such eligibility will ensure a more transparent and liquid market for FYI’s common shares within the US, much like daily on-market trading on the Australian Securities Exchange. The Company expects the completion of the process of seeking DTC eligibility during May 2021.

FYI notified that the OTCQX trading will be carried out via OTC market maker, B.Riley Financial, in the meantime.