Perth-based explorer Krakatoa Resources Limited (ASX:KTA) is leveraged to high-value metals in low-risk jurisdictions and is dedicated to value addition of mineral and energy projects. The Company has reported numerous exploration successes over time with an aim to develop into a leading producer of electrical energy, precious metals, and critical elements.

In its latest update, KTA has declared initial assay results from its maiden RC drilling program over the Bulgandry Goldfields, located within its fully owned Rand Gold Project. 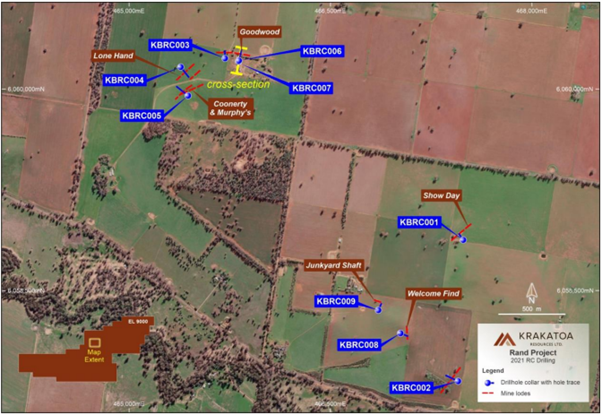 KTA’s reconnaissance RC drill program was designed as a broad, first-pass test of a small selection of known historical mine workings within the Bulgandry Goldfields.

KTA drilled nine RC holes, out of which eight tested for widths and gold grades below surface workings, and one hole tested a new zone of veins mapped and sampled by KTA in the current year.

Moreover, the company has received assay results from the program after the laboratory fast-tracked all initial composite samples. 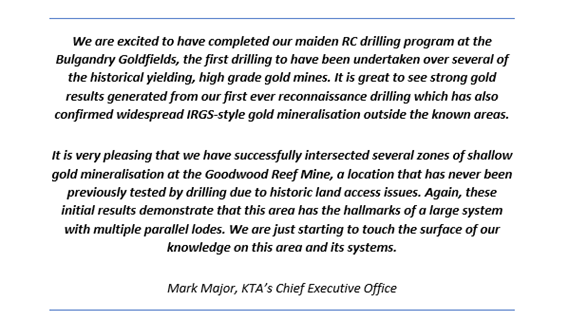 KTA has defined substantial shallow gold mineralisation through the RC drilling program, with best results including:

Findings from the Goodwood Reef

At the Goodwood Reef, KTA drilled three holes, KBRC003, KBRC006 and KBRC007, wherein KBRC006 and KBRC007 tested the eastern end of the known workings. Through these holes, KTA successfully intersected the main lode down-dip from the open slot, where mineralisation was found to occur as structurally controlled quartz-pyrite veins with strong silicification.

A wide zone of 40 metres grading 0.22g/t Au incorporating the oxide and sulphide zones of the main lode was returned from KBRC006. The main lode’s increase in width at depth could suggest supergene enrichment or simply broadening of the zone.

Additionally, KTA intersected two other interpreted, low-grade sub-parallel lodes, a hanging-wall (HW) and footwall (FW) zone, all of which remain open, down-dip as well as along strike.

Three of the five holes (KBRC001, 004, 005, 008 and 009) showcase shallow ineffective, 1986-vintage percussion drilling and were drilled to total depths of 25-39 metres. These historical angled holes only tested the weathered zone, while KBRC002 tested a zone of mapped veins with positive geochemistry.

KTA tested the Show Day Mine under historical hole HB19 through hole KBRC001 while KBRC002 aimed at testing under a zone of arsenopyrite- and scorodite-bearing quartz veins with favourable IRGS geochemistry.

KBRC008 successfully tested the flat, west-dipping Welcome Find Mine lode in the weathered zone and intersected several other zones of quartz±pyrite veining but failed to return substantial gold values.

A relatively deep unnamed shaft was drilled through KBRC009, and an interpreted mine lode was intersected from 79 to 81 metres. This lies within a completely silicified zone that assayed 10m @ 0.14g/t Au.

DID YOU READ: With AC drilling complete, Krakatoa Resources (ASX:KTA) kicks off RC drilling at Rand

Overall, a minimum of seven from the nine recent holes intersected hornfels, suggesting that the workings are proximal to intrusives.

KTA believes that the present scale of the target area coupled with positive geological setting masked by the cover, and the tenor of the geochemical results being produced in this early phase of exploration, hints at the strong potential of a large-scale system that remains unearthed.

At present, the explorer awaits the final assays from the regional scale auger soil geochemical survey and the reconnaissance air-core drilling program over the magnetic bullseye targets area. The Company looks forward to receiving major news flow in the near months from this emerging greenfield exploration.

Moreover, KTA is optimistic that these results will encourage the company to plan the next phases of its systematic exploration strategy.