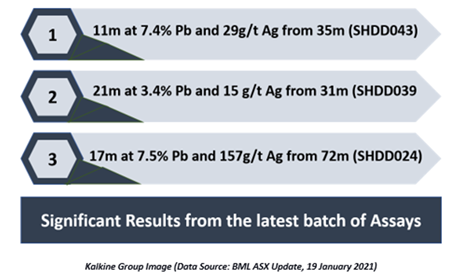 The latest drill results are expected to allow several historic intercepts to be integrated into the Mineral Resource Estimate (MRE). Further assay results are anticipated over the coming weeks.

An Overview of the Phase IV drilling Program

Boab Metals released a PFS in August 2020 that highlighted strong economics and extensive, high-grade Pb-Ag-Zn deposit at Sorby Hills Project. The 4,803m Phase IV drilling program with 58 diamond and rotary/diamond drill holes was undertaken on the back of exciting PFS outcomes. The program aimed at:

Boab Metals has received results for various brown-field drill holes that are expected to positively impact the project’s resource base and the overall future pit design.

Boab Metals unveiled assays from the first four batches of samples taken from the Sorby Hills Project. The drilling campaign, designed for collecting data for updating metallurgical and geotechnical parameters required for the ongoing DFS, consisted of 30 diamond drill holes for an advance of 3,340 metres.

The previously reported geological observations are supported by the recent results which underpin the future drilling plan.

In a nutshell, the intersections are expected to have a very favourable impact on the resource of the Sorby Hills.

Drilled at the Northern portion of the Omega deposit, the hole named SHDD017 returned a significant drilling outcome with mineralisation located below the current design pit.

The drill hole intersected a broad minerlised zone of about 40 metres containing 1.4% Pb and 10 g/t Ag, including-

The assay results validate the outcomes of historic deeper drilling which intercepted mineralisation outside the current MRE. The new results will enable the design and targeting of a new mineralisation zone. Besides, a new specific drilling program will be designed post assimilating the new data within the existing data base and conducting an assessment of the significance.

The holes were drilled into the southern portion of the Omega deposit and each has intersected a significant interval of mineralisation sitting outside the current boundary of Sorby Hills’ Mineral Resource Estimate.

The results from drill hole SHDD039 indicate the potential for a second significant mineralisation interval lying below the current open pit design.

The upper and lower mineralised zones intersected in the drilling campaign are as following:-

Results are pending from SHDD046 drill hole, which is a 30m step-out drill hole situated to the northwest of the current Resource envelope. The drill hole intersected strong mineralisation near the surface (<10 metres). The historical and recent drilling campaign demonstrated variable results and consequently the resource was not extended to the targeted area. The initial results confirmed high grade assay results and will potentially impact the mineralisation envelope.

Drill hole SHDD043 has confirmed the continuity of the ore body down-dip of the current Mineral Resource Estimate and open pit design in addition to indicating a broader zone of mineralisation than has previously been modelled in the area of the Inferred resource. Besides, it will also allow integration of further historic intercepts down dip.

Following the receipt and interpretation of all the results, Boab would decide if it shall include further drilling activity into the DFS, with the aim of potentially increasing the mining and processing rates.