SenSen Networks Limited (ASX:SNS) has managed to cut the mustard in the second half of 2020 (1H FY21), despite turbulent times triggered by the coronavirus pandemic. In line with its objective of becoming an internationally recognised AI company, Sensen managed to make incredible strides across different dimensions during the half-year period.

The AI solutions provider witnessed a robust 1H FY21, recording its best-ever half-yearly financial results since its listing on the ASX. The Company achieved a record half-yearly revenue of A$2.5 million, signifying 33 per cent Y-o-Y growth on the December 2019 reporting period.

SenSen’s robust financial performance and immense shareholders’ support has been clearly reflected in the positive performance of its share price. The Company highlighted that its share price has soared by a staggering 300 per cent since the start of FY 2021.

Interestingly, SenSen observed several key developments since the beginning of FY 2021, including the completion of its first-ever acquisition, the listing of SenSen on the US OTC markets and completion of a capital raising with high-conviction global equities fund manager VGI Partners. All in all, these events elevated the Company to a higher level of market recognition.

Let us quickly gaze through the key developments that shaped the remarkable half-year for SenSen:

Since July 2020, SenSen added many new customers to its kitty, which contributed to both ARR and upfront revenues of the Company.

Continuing its record of near-zero churn, SenSen was able to renew all its existing customer contracts that were due for renewal. These contracts comprise Changi International Airport (through its partner Beacon), the City of Calgary and Brisbane City Council.

SenSen successfully completed many high-profile technology trials during the half-year period. At present, the Company is working with the partners and customers engaged in these trials to seek ways to take them into the production phase.

The Company also initiated some of the new trials in FY 2021, which are still in progress. These trials include:

In SenSen’s experience, about 70 per cent of its technology trials are paid, with around 90 per cent transforming into multi-year ARR contracts.

SenSen continued to invest strongly in novel product innovation during the period to reduce the cost of adoption by its customers. The Company further offered several new high-value features to boost its margins. Some of these innovations are stated in the figure below: 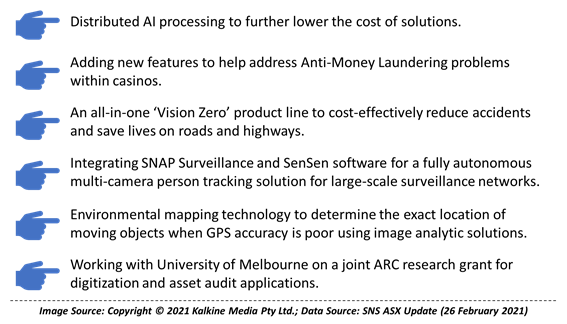 Post the reporting period, SenSen completed a massive A$7.15 million placement to institutional and private investors for a total of 57.2 million shares. The capital raising was undertaken to speed up the Company’s sales, marketing & product delivery capabilities.

The Company now has more than 140 employees and contractors spread across several locations in India, Australia, North America, and Singapore. Out of these, about 100 are based in Hyderabad, India.

Based on new clients added in FY 2021, contract renewals & additional orders secured from current customers, SenSen estimates an ARR of about A$4.1 million in FY 2022 that reflects a Y-o-Y increase of 24 per cent. Moreover, the Company expects additional orders to further crank up ARR beyond these estimates.