Since 1951, Saunders has been aiding to the development of Australian industries. The Company offers a range of reliable, innovative, and cost-effective solutions, with trouble-free project delivery to the oil & gas, infrastructure, defence, water, energy, mining & minerals sectors.

Of late, Saunders has been growing in the infrastructure sector - a significant part of its business. A catalyst for this growth is the rollout of the NSW Government’s Fixing the Country Bridges Program, a key strategic focus for Saunders’ in FY22 and beyond.

Saunders’ sustained growth has made it a reputable, multi-disciplinary company delivering a range of service offerings to industrial and infrastructure clients. The Company has added three more names to its diverse client base list, including an NSW Local Government Authority. The below demonstrates Saunders’ latest awards/projects in the infrastructure sector- 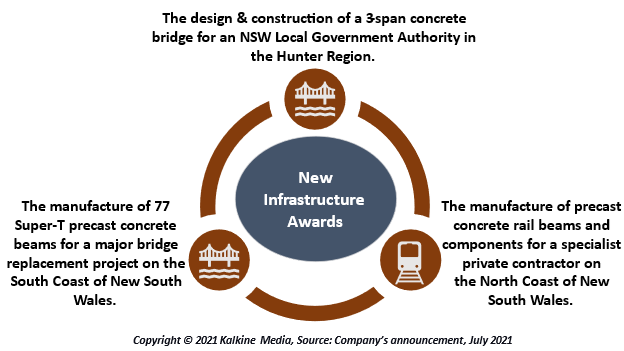 “We are excited with the continued growth of the Group’s Infrastructure projects and the increase in the pipeline of opportunities within this sector,” says Chief Executive Officer Mark Benson. Notably, the new projects will contribute to Saunders’ revenue from Q1-FY22 into Q4-FY22.

In May 2021, Saunders was awarded approximately AU$11 million in infrastructure projects. These included-

An overview of Saunders’ infrastructure offerings

Transport infrastructure is a major part of the Company’s business, in which it has over four decades of experience. Saunders Civilbuild is focused on undertaking the construction, upgrade, and maintenance of road and rail bridges, wharves, and jetties.

The Group’s recent success and continued momentum in the infrastructure sector have been primarily underpinned by the Fixing the Country Bridges program, which the NSW Government released at the end of 2020.

The Fixing Country Bridges is an AU$500 million NSW Government program. It aims to create a new legacy for the local NSW road network, facilitating councils to replace over 400 timber bridges in poor condition and better connect regional and rural communities.