The sustained progress of Musgrave Minerals Limited (ASX:MGV) at the Cue Gold Project continues to beef up resource inventory while the Company systematically tests targets to deliver new discoveries. Over the past few months, the high-grade Cue project has witnessed high-octane activities and success, including explosive growth in Break of Day’s mineral resource and solid drilling results from the regional aircore program.

Let us look at some of the strong elements of the Company’s solid gold portfolio, catalysing its progress towards the production getting off the ground. 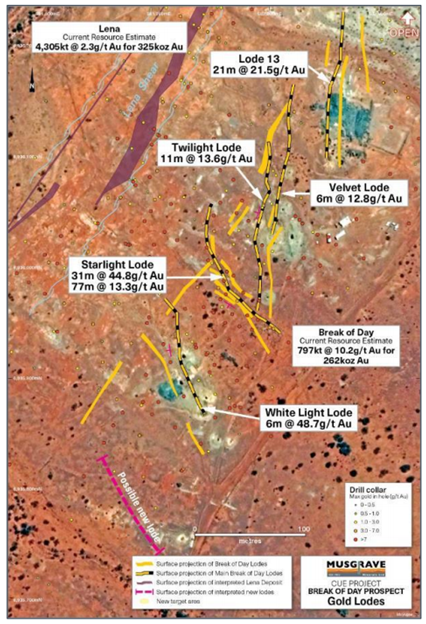 Break of Day Deposit loaded with a high-grade resource

The mineral resource at Break of Day deposit stands at 797kt @ 10.2g/t Au for 262koz Au. The deposit boasts a high-grade and potential high-margin open cut. It consists of White and Starlight, where drilling proved extremely successful returning high-grade intersections.

Notably, the Starlight deposit holds 240kt @ 17.0g/t Au for 131koz Au from 3 metres below the surface, and 85% of the Break of Day resource is hosted by five lodes. The potential for repetitions is demonstrated through re-interpretation of the geological model.

The Company’s ongoing focus at the Break of Day is on near-surface high-grade ounces, and PFS level studies have commenced.

New White Heat, also known as Target 2, is one such discovery that improves resource growth potential for the Company. The target, which has no historical drilling, returned new high-grade intercepts, including:

Target 2 is open down plunge, and the drilling ongoing, with assays, pending.

An extensive regional aircore drilling program, focused on testing new gold targets, identified anomalous gold in the regolith, thereby defining a new gold corridor west of and parallel to Lena. Aircore drilling has extended the Target 14 gold anomalism to a strike length of more than 3 kilometres.

Target 14 forms part of a new, long gold corridor, which is 7 kilometres long. The target remains open to the south and down dip, and there remains 2.5km of strike between Target 14 and Big Sky, with drilling results pending for over 110 aircore drill holes.

Musgrave Minerals is inching towards the strategic objective, basking in the presence of extensive resources, superior gold grade, high recovery, robust infrastructure and significant exploration upside. Meanwhile, its exploration joint venture with Evolution is also making headway, with diamond drilling in the works.