QX Resources Limited (ASX:QXR) announced that the company has secured a 50% stake in two exploration tenements via its wholly owned subsidiary, World Metals Pty Ltd, in the prolific Pilbara region of WA. 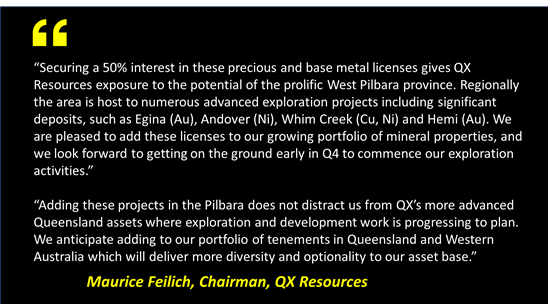 New tenements in the Premium neighbourhood

QX will be a 50% beneficial owner of the granted prospective Exploration Licences, E47/4462 and E47/4463, which stretch over an area of 29km2 in the proven regional setting of Pilbara. The remaining stake will be held by Pilbara Base Metals Pty Ltd., the introducer of the licences. 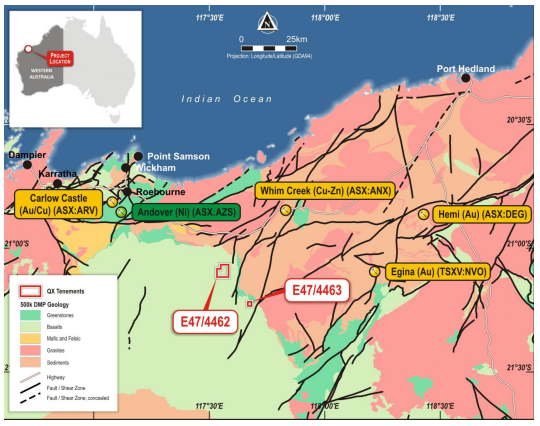 Gold – The regional setting hosting the exploration tenements is considered highly prospective for orogenic style gold mineralisation within basalts and related differentiated volcanic rock formations. The area is also perceived to be prospective for “Novo” style sediment hosted gold in the sandstones and sediments of the Hardey Formation.

Nickel & Base metals– QX considers the region’s potential for nickel and base metals to be equally significant in light of several mafic intrusions. Even though some intrusions have been tested for Nickel in the past, no programs have been conducted to locate nickel sulphides, especially within the Cooya Pooya type intrusion.

The tenements coincide with areas of the Coonya Pooya Dolerite, a fine to medium grained mafic sill which can form as dykes within the host Hardey Formation.

The technical team at QX Resources includes contracted geologists with significant exposure to working in the Pilbara region. The team is now assessing the mineral projects and plans to conduct a first pass ground reconnaissance exploration program with sampling in the next month.