Gold exploration in the Drummond Basin of Queensland is going from strength to strength for QX Resources Limited (ASX:QXR).

In its latest market update on 6 May 2021, the company announced the completion of a 1,500m reverse circulation (RC) drilling campaign at the Lucky Break gold mine in the basin. QXR had finalised the targeting of prospects and approvals for the initial RC drilling program at the Lucky Break project during the March quarter. 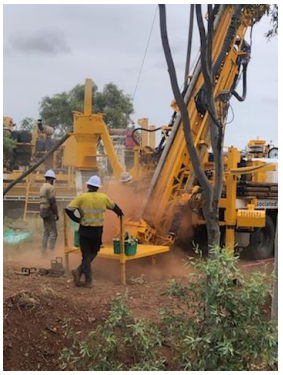 Commenced in April, the first pass drilling program was designed to assess the mineralisation at the main Lucky Break mine and the small Lucky Break South pit. The drilling activity at these pits have been completed, and the rig has already been demobilised from the site.

The mineral samples have been sent for multi-element assaying to ALS Townsville. The results are anticipated to be released in the upcoming four to six weeks.

QXR will continue to assess opportunities for follow-up exploration at Lucky Break and surrounding areas, along with other prospective areas. 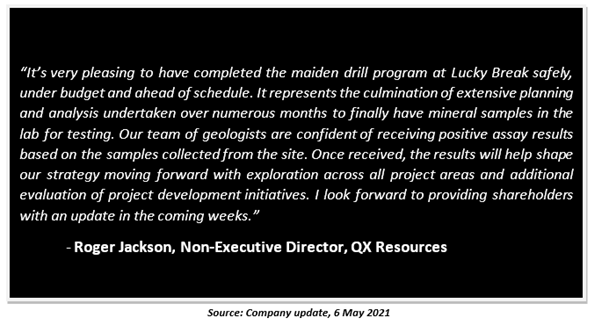 QXR also recently released its quarterly findings for the period ended March 2021. During the quarter, the Company continued to focus on its gold assets in the Drummond Basin of Queensland. Additionally, QXR secured EPM 27791 for the Llanarth project during the reported period.

QXR owns a 50% stake in Zamia Resources, which owns four exploration permits stretching across 115 sq. kms in the Central Queensland goldfields. The permits host two historical mining centres as well as multiple unexplored targets within the Drummond basin, which boasts of a long gold-mining legacy with gold endowment of more than 6.5 moz.

The two open-pit historical gold mines are the Belyando and Lucky Break Mines. 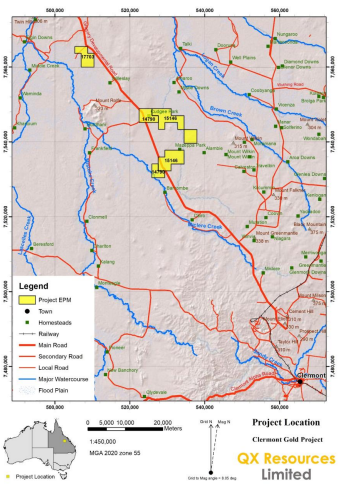 QXR presence in the Drummond Basin of Queensland

The compilation and validation of historical drill data has provided the data required to commence initial solid modelling on the Lucky Break gold deposit on the exploration tenement, EPM 14790. The data relating to more than 8,700m of drilling at 177 holes with over 4,100 gold assays has been recovered, compiled, and processed to make it useable for computer-aided design.

The historical drill data to the south of Lucky Break includes –

The wireframe modelling as per the historical data estimates an enclosed volume of 193,500 cubic metres and displays a linear 724.5m drill assay with an average grade of 2.12 g/t Au and 1.05 g/t Ag at a cut-off grade of 0.3 g/t gold. The wireframe solid modelling has yielded spatial and volumetric data, underpinning QXR’s strategy to go forward with drilling at Lucky Break.

During the quarter, the Company’s technical team undertook a site visit and collected face samples, which returned 2.6m at 4.70 g/t gold at the Lucky Break pit.

During the quarter, QXR secured a new exploration tenement, EPM 27791. The tenement stretches over 232 sq kms with high prospectivity for gold-silver mineralisation. Now, QXR holds a strong ground position of over ~350 sq kms in the Drummond Basin.

At the end of the March quarter, the Company had a cash balance of approximately AU$405,000, making it well-funded for the next two quarters.