Starting the period on a high note, the company entered an agreement with Zamia Resources Pty Ltd (Zamia) in July 2020. Zamia owns four exploration permits stretching across 115 km2 in the Central Queensland goldfields. QX currently has a 50% interest in Zamia, with the spend on the drill program likely to see QX move to a 70% interest.

The gold projects are located on highly prospective ground within the Drummond Basin, which has a gold endowment of over 6.5 million ounces and a long heritage of mining operations. 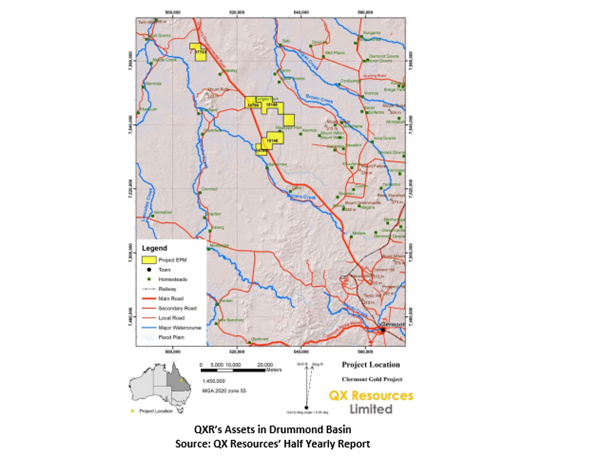 QXR commenced an extensive infill soil sampling program at the Disney and Belyando tenements. The Company’s technical team has been poring over the historical drill results and previous soil sampling reports to delineate new prospective targets.

Red Dog Prospect: QXR discovered a 675m long gold in soil anomaly at the Disney (EPM 17703) tenement in November 2020. The soil survey targeted the infill and extended areas of the soil results from the previous sampling programs in 2013, 2014 and 2015.

Evaluation of the results displayed a distinct and localised area of gold anomalies, labelled as Red Dog, along a 675m by 255m cross strike, supported by coincident arsenic, antimony, and silver anomalies.

The rock grab samples from the Red Dog anomaly yielded gold grades of up to 2.89 ppm.

Ibis Prospect: During mid-December 2020, QXR released the results of a soil survey at the Ibis prospect (EPM 15145). The campaign infilled the previous work undertaken by Zamia in 2007 and 2015. The samples were assayed to a 0.001 ppm detection limit by ALS using 30g fire assay with an ICP AES finish.

According to QXR, this data signify that Ibis is an excellent prospect for further exploration as it holds a distinct gold anomaly from an underlying mineralisation which is genetically and structurally related to the Belyando gold deposit. While the exploration activities at Ibis are in early stages, the data suggests either a breccia pipe or stockworks low sulphidation epithermal gold system.

Must Read: Gold Hunt on the Cards for QX Resources (ASX:QXR) in Drummond Basin

Addition to the Leadership Team - QX Resources appointed Mr Roger Jackson to the Board as a non-executive director in September 2020. He has an extensive experience in the small resources sector as a public company director.

Good Read: Meet the Leadership at the helm of gold explorer QX Resources