The latest results recorded high-grade PGM mineralisation with grades up to 9.57g/t 3E PGM at a depth of 154m. The remaining assay results for 7 holes are expected within the next 2 weeks followed by base metal and rhodium assays shortly after that.

The drilling and exploration programs at Parks Reef so far have delineated inferred mineral resources of 1,390,000 ounces of combined platinum, palladium and gold with 53,900 tonnes of copper with an update due shortly taking into account the full extent of the reef to a depth of 100m. Further, the project has also shown significant potential for iridium and rhodium.

The latest drilling program seeks to extend the mineral resources along the entire strike length of 15km at Parks Reef against 8.5kms previously and up to a depth of 100m. The company will also be sharing the upgraded mineral resource estimation along 14.6km interpreted strike length.

Podium has already completed 27-hole, 4,157m, Stage 7 drilling program in late June. The Stage 7 drilling program planned to complete the drill pattern to 200m spaced sections along the full strike length and to test the Central, Far East and the Western sectors. The drilling activity at the 800m strike in the central sector which hosts a cultural heritage site is still pending. Podium has already conducted cultural heritage surveys and has lodged an application seeking access to complete the drill pattern in adherence to Section 18 of the Aboriginal Heritage Act.

Ten drill holes at the Central sector have been completed and the PGM assay results for 9 holes have already been announced. The assay results highlight the presence of high-grade PGM mineralisation, proximal to the recorded cultural heritage site. The latest high-grade assay results include 1m @ 9.57g/t 3E PGM from 154m. 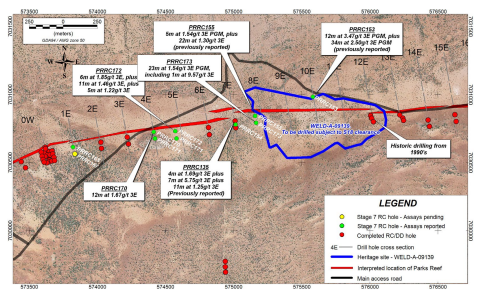 The company has also lodged a Section 18 application with DLPH to drill 6 holes within the site boundary and the response for approval is expected in September.

The area hosts high-grade PGM mineralisation with coarse, pegmatoidal peridotites. The company has lodged an application under sector 18 with DLPH to drill 6 holes within the site boundary.

The assay results for 9 of the 12 holes have been drilled to target the existing resources in the Western sector. Some of the best assay results include – 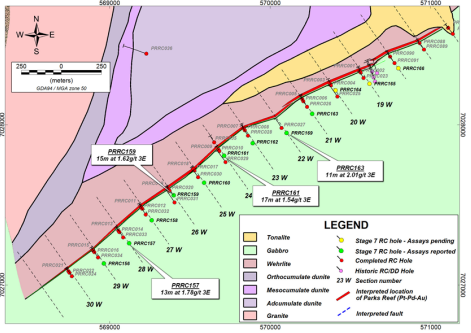 A total of 4 drill holes were completed on the extreme eastern end of the interpreted Parks Reef. So far, assay results for only 1 hole have been received. No significant assay results were recorded, and it is interpreted that the hole was drilled in the north of the reef location.

Base metals results: The results for 4 holes from the Stage 7 campaign have been received. The significant results included a 9m intercept with 0.36% Cu from 156m at PRRC152 hole.

The recent drilling program has now tested 200m spaced sections along the entire 15km strike (except 600m heritage site section) and an additional 0.8km on the Western Extension, which generated and shared new critical insights on the strong control and the location of the reef. A total of 180 holes aggregating to 19,600m were drilled. Further, the PGM and Cu grade remain consistent along the entire reef with numerous sections with high-grade mineralisation.

The subsequent steps at the Parks Reef project include-