The final base metal assay results are now released for Stage 6 holes that were drilled during the infill drilling in the central-east area and exploration drilling on the western extension.

The assay results include –

The assay results outline the continuity of the base metal horizon and the thickening of the base metal-PGM stratigraphic horizon in the central area of Parks Reef. The Western extension also recorded high-grade copper concentration such as –

Podium has been undertaking the Stage 7 drilling programme at the Parks Reef PGM project. The drill programme is anticipated to include over 4,000m of drilling at 200m spaced sections at Parks Reef to a depth of 100m and the 2.4 km western sector to a depth of 200m. 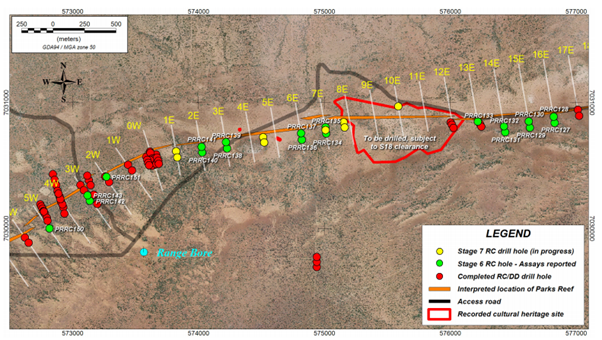 The company has completed 4 holes, testing the continuity of the high-grade 5E PGM mineralisation in the central-east section of Parks Reef. The drilling programme is nearing completion and the initial assay results are awaited shortly. The final assay results will be released by the end of July.

The Parks Reef project hosts an inferred mineral resource base of over 1,390,000 ounces of combined platinum, palladium, and gold with base metal credits of 53,900 tonnes copper over 8.5km of the known 15km mineralised strike length to a depth of up to 100m.

Podium anticipates to commence WA EIS co-funded 750m Parks Reef deep diamond drill programme before the end of July. The company has already received the quotes from drilling contractors and has finalised the agreement to drill 3x750m-deep diamond drill holes targeting the reef at a depth of more than 500m beneath the surface.

The drilling campaign will check the continuity of the reef at depth and will also target parallel PGM bearing chromitites in the hanging wall mafic stratigraphy. The drill programme will receive co-funding from the Western Australian government through the Exploration Incentive Scheme (EIS).