Podium Minerals Limited (ASX:POD) has announced the extension of the agreement with EV Metals Australia Pty Limited (EV Metals). On 17 December 2020, Podium and EV Metals had entered into an agreement to align the mining leases with the ownership transfer of the mineral resources as per the commodity focus on the respective parties.

The agreement was subject to FIRB approval which has already been received. The agreement is contingent on a number of conditions precedent which are approaching completion. As per the agreement, both parties have agreed to extend the deadline to 31st December 2021 to satisfy the remaining Conditions Precedent.

POD gearing up for development of Parks Reef PGM Project

Last week, the company announced the expansion of the mineral resource estimates to 2.2 million ounces of combined platinum, palladium and gold along with base metal credits with 79,000 tonnes of copper. The upgraded mineral resource estimate has been defined over a strike length of 15km at the Parks Reef project up to a depth of 100m. Earlier, this week Podium announced the appointment of Mr. Sam Rodda as the new Chief Executive Officer. 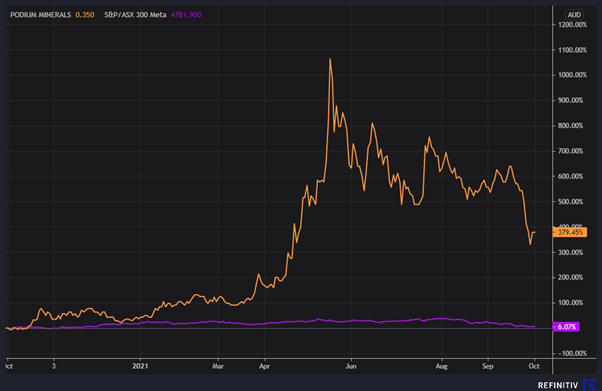 Podium shares have offered a 52-week return of ~379.45%, as of 1 October 2021. The equity easily outperforms most of the exploration and mining companies listed on the ASX.