The revised Exploration Target estimates to deliver 70Mt to 75Mt ore at grades between 1.2g/t to 1.6g/t 3E PGM containing 2.7-3.8 million ounces of combined platinum, palladium, and gold. The Exploration Target at Parks Reef is exclusive of the 2.8Moz 3E PGM Inferred Mineral Resource, which was based on 224 RC and diamond drill holes.

The Exploration Target is based on a mineralised envelope to a depth of 250m beneath the surface along the remaining strike length of 12km, which has not yet been classified as inferred resource. The target was reported in accordance with the JORC 2012 standards and was prepared by an independent consultancy Trepanier Pty Ltd.

An Australian PGM exploration and development company, Podium is confident about the continuity of mineralisation at Parks Reef to a depth of 250m since the drilling >100m deeper sections on the 200m spaced sections confirmed very consistent PGM mineralisation along the 15km strike.

Also, deep diamond drilling was concluded in January 2022, intersecting the reef at depths more than 500m, suggesting the continuous nature of the reef, at least to this depth. Podium plans to test the Exploration Target block with the 10,000m Stage 10 RC drilling campaign. 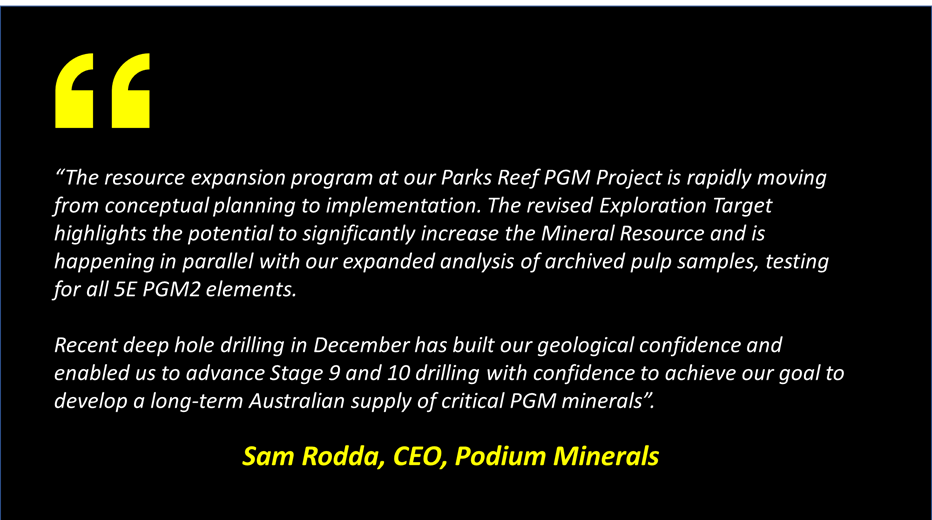 Earlier this week, Core Drilling Services Pty Ltd commenced the 2,600m Stage 9 drilling program, which aims to finalise the first pass of the 200m spaced drilling. The drilling program will test the reef to 100m beneath surface in areas where previous drilling program couldn’t complete holes.

The drilling program will test the shallow supergene enriched mineralisation at 30 holes, where reef had been intersected at depth in the past. Drilling at the 800m section, which hosts a cultural heritage site, will also be tested upon securing the s18 clearance. The s18 application has gained the support of the Native Title holders and the company expects the decision by the Minister as soon as practical. The Stage 9 drill program is anticipated to be completed in over 14 days. 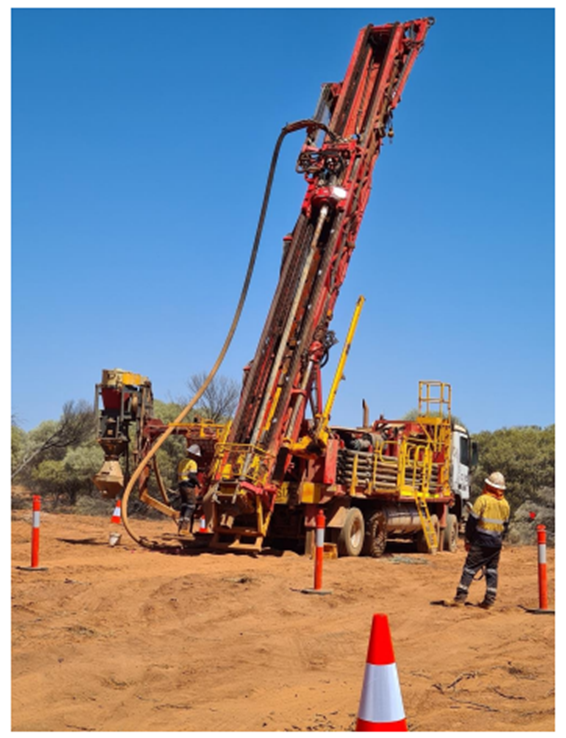 Following the completion of the Stage 9 drilling, the 10,000m Stage 10 RC drilling campaign would commence to test the 12km strike to a depth of 160m along the entire 15km strike at Parks Reef. The Stage 10 drilling program will comprise 48 holes and will focus on expanding the resource by drill testing the Exploration Target. The program is anticipated to be completed in over 10 weeks.

In January, Podium selected and sent 2,794 pulp samples with reef intervals to Bureau Veritas’ laboratory for nickel sulphide collection fire assay with ICP-MS. The assaying will report the presence and grades of gold, platinum, palladium, iridium, osmium, rhodium and ruthenium. Assaying of 624 samples have already been completed. The assaying of the remaining samples is likely to be completed within March.

Once received, assay results will be incorporated into the subsequent resource model. So far, all historically analysed reef intersections have resulted rhodium and iridium within the lower PGM horizon with average 3E PGM grades of 4 to 5% over the entire PGM horizon. Rhodium and Iridium are extremely high in value and currently trade at around US$20,000 and US$3,900 per ounce, respectively.