Australia-based Platina Resources Limited (ASX:PGM) has been steadfast in its journey towards building a robust project portfolio in Western Australia.

The Fraser Institute has ranked Western Australia as a Tier 1 mining destination, highlighting streamlined processes for permitting and approvals in the region. The Company aims to continue seeking and developing projects in the enriched metals and mining zone of Western Australia.

With its strategic focus towards Western Australian gold, the Company is advancing well and expanding its foothold in the Yilgarn Craton Province and the Ashburton Basin within the region.

How is Challa Gold Project in Yilgarn Craton Progressing?

Last year, Platina Resources strategically decided to focus on gold assets in Australia. In line with its strategy, the company acquired Challa Gold Project in Yilgarn Craton, which is a proven world-class gold and base metals province.

Yilgarn Craton boasts of quality infrastructure for project exploration and development. There is a strong corporate interest in the area, with four processing mills nearby. 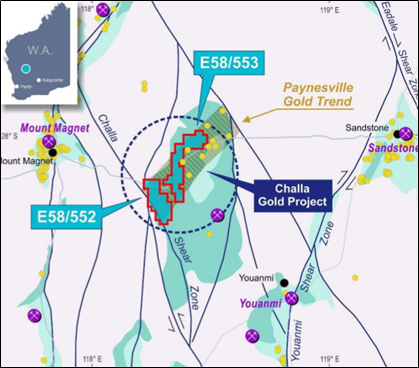 To know in detail, read here: Platina Resources (ASX:PGM) on course to pursue its golden dreams at Challa project

The Company has undertaken soil sampling programs at the project location to establish drilling targets. More than 2,000 soil samples have been collected over prospective areas. Final assay results are pending.

After receiving the assay results, the company plans to undertake a rotary-air-blast (RAB) drilling program at the project to follow up targets generated through the comprehensive soil program.

Located in the western Yilgarn Craton region, tenement application (E09/2423) for the project covers an area of 165km2. Very little modern exploration has been undertaken in the region due to lack of outcropping greenstones.

Platina Resources plans to commence soil sampling program once the tenement is granted.

Along with advancing its endeavours focused on the Challa gold project in Western Australia, Platina Resources has recently reached a conditional term sheet to acquire the Xanadu Gold Project.

The project, including seven prospecting and five exploration licences covering an area of 493km2, sits within the Ashburton Basin, which is an emerging gold province, hosting a number of major gold projects. 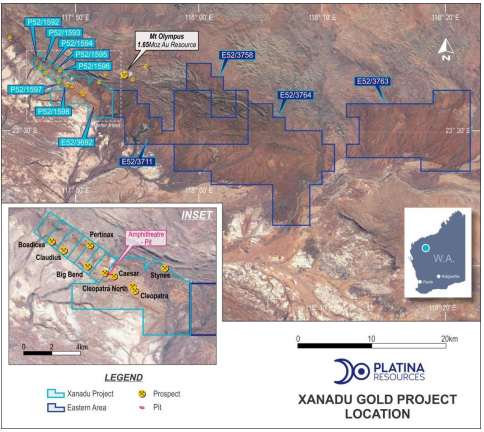 The project is located in a prime location, comprising a favourable regional-scale structural setting, 7km from the Mt Olympus gold project. It is 38km from Paraburdoo, which is a key mining centre with support services for exploration and development.

The historical drilling outcomes highlight how promising the asset is. Along a 10km trend, widespread gold has been identified. An extensive mineral system has also been identified through intense hydrothermal alteration.