The Company’s activities during the period were primarily focused on the Challa Gold Project. Also, subsequent to the end of the quarter, the Company signed a conditional term sheet to acquire the Xanadu Gold Project in WA.

Also Read: Platina Resources Sitting On A Goldmine Of Opportunities in Western Australia

During the March quarter, the Company progressed with reconnaissance and soil sampling programs at the project. PGM is testing the soil sampling technique as a methodology to identify gold anomalies over potential gold systems at depth.

Since the beginning of exploration in November 2020, over 1,880 soil samples have been finalised.

With the final soil program completed in mid-April, the Company is awaiting the assay report. After which, it plans to commence a maiden rotary-air-blast (RAB) drilling program at the project to target various prospects generated by the soil sampling programs. 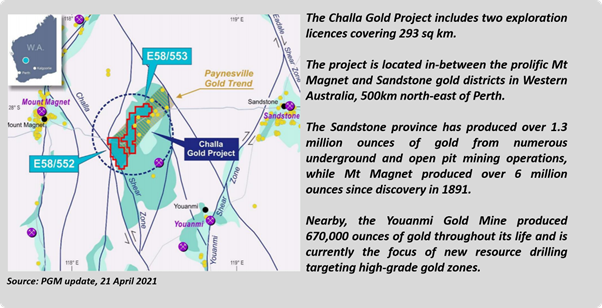 Must Read: Platina Resources (ASX:PGM) on course to pursue its golden dreams at Challa project

In line with its strategy to focus on gold projects in Western Australia, the Company added a new gold project to its portfolio.

The Xanadu Gold Project in the Ashburton Basin in Western Australia lies in close proximity to the Mt Olympus gold deposit (containing 1.65Mozs)

Spread over an area of 498 sq km, Xanadu holds five exploration licences and seven prospecting licences. The project has immense appeal, owing to the number and width of economic-grade gold drill intercepts. What adds to the excitement is that these intercepts have never undergone a systematic exploration. 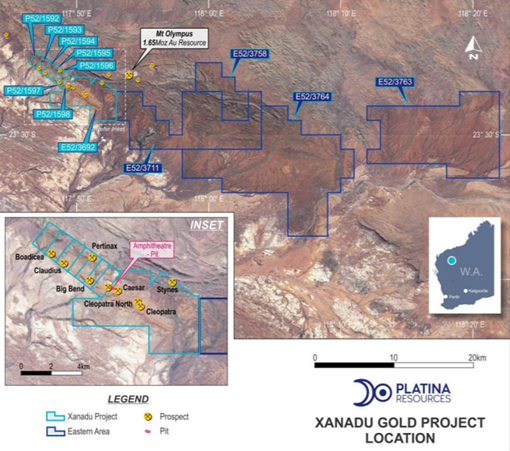 Platina's exploration strategy would initially comprise low-cost geochemistry and geophysics to build a better understanding of the project potential, as well as to define both shallow and deeper targets for drilling.

Munni Munni Platinum Group Metals & Gold Project - The project is located in the Pilbara region of WA. PGM has a 30% interest in the project, which is a JV with Artemis Resources Ltd (Operator).

During the end of February, PGM updated the market about the Supreme Court verdict on its proceedings against Artemis.

Cash Position - At the end of the quarter, PGM had AU$3.44 million in cash, including Major share sale proceeds. The investments totalled AU$25.7 million.