Through the program, OBM aimed at testing gold targets with no prior drilling or effective exploration and completed total of 16,112m drilling to blade refusal, with 6,027 metres presently awaiting assay return. 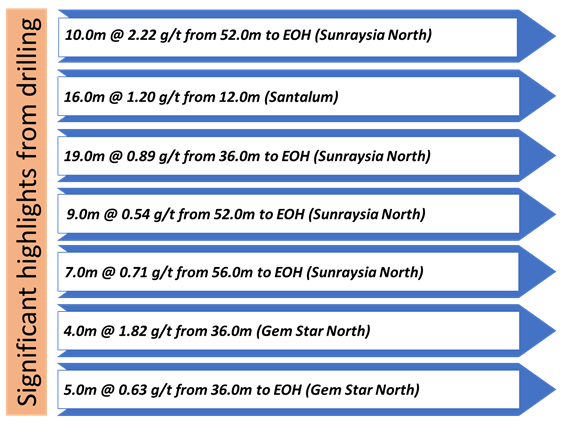 The rest results were returned from the drilling at Sunraysia North and Santalum prospects. The significant end of hole (EOH) mineralisation intersected along the Riverina trend in three consecutive drill lines spaced 400m apart indicated that the results are highly encouraging.

At the Santalum drilling, OBM intersected significant gold mineralisation in one hole on the extremely northern line while mineralisation remains open to the north.

OBM is planning for additional AC and RC drilling planned to follow up on these promising results.

The drilling program at Sunraysia North was aimed at testing the Riverina mineralised trend south of the British Lion deposit in an area that has not witnessed drilling earlier. The program helped in intersecting gold mineralisation on three consecutive drill lines, which is highly significant. 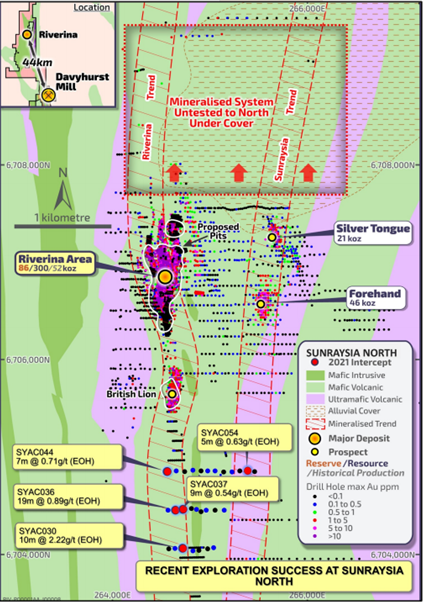 The drilling at Santalum aimed at investigating the regolith profile and map bedrock geology. This was intended to help in refining the areas that are a possible source for the gold anomalism identified in the auger program completed in 2018.

Currently, the Company is engaged in designing the second phase of more detailed drilling to target the newly identified gold mineralisation.

The broad bedrock mineralisation being intersected on the northern line in hole SAAC121 indicates that the results of this initial drilling have been extremely encouraging. 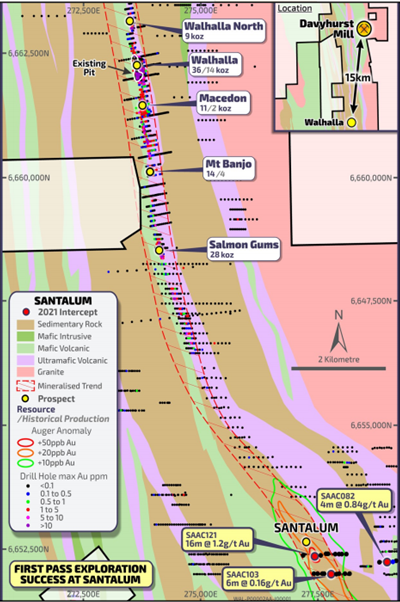 Round Dam mineraled trend and drill results at Santalum prospect

A second weaker mineralised zone was also intersected in a drill line to the east of the main auger anomaly with SAAC082 returning 4m @ 0.84 g/t Au.

Significant potential at Queen of Hearts

The drilling at Queen of Hearts intersected a series of highly weathered metasediments, mafic and ultramafics with extremely leached regolith profile down to 50-70m depth. Moreover, weak anomalism across an 830m strike length was intersected through numerous holes, and the best results include the following: 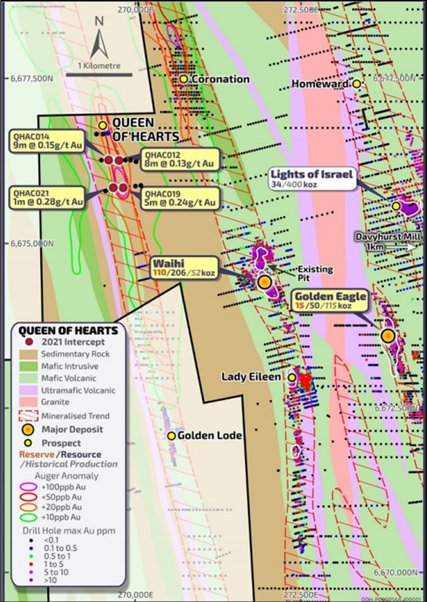 The occurrence of “End of Hole” intercepts in nearby holes at a relatively wide spacing of 80m are very much significant as they potentially indicate a proximal primary bedrock gold source.

Based on the wide-spaced AC drilling, OBM believes that there are substantial data gaps between anomalous holes which will be infilled as part of the phase 2 program.

All in all, OBM believes that the results are highly significant and is now planning to undertake further activities at these prospects. In the coming times, the results for other target areas shall be interesting to see.