The drilling campaign at RPM had already confirmed the potential of high-grade gold mineralisation on RPM North. Today’s results depict the presence of a broad zone of high-grade gold with spectacular results, including 3m @97.8g/t Au from RPM-005 hole.

An overall average grade of 3.5g/t Au over 400m, instils more confidence in the prospect and paves way for the next round of drilling to expand and prove up RPM North. Nova is planning to test the gold zone with a much larger footprint at RPM South as early as possible in 2022. 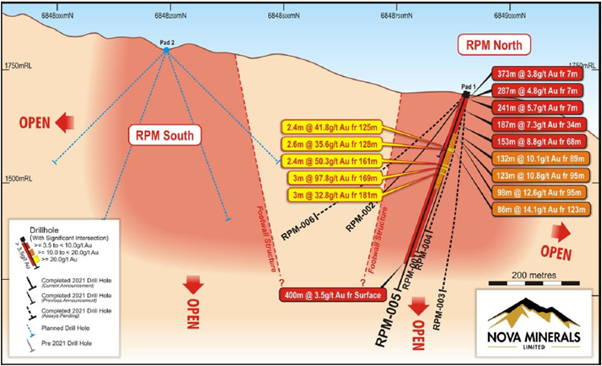 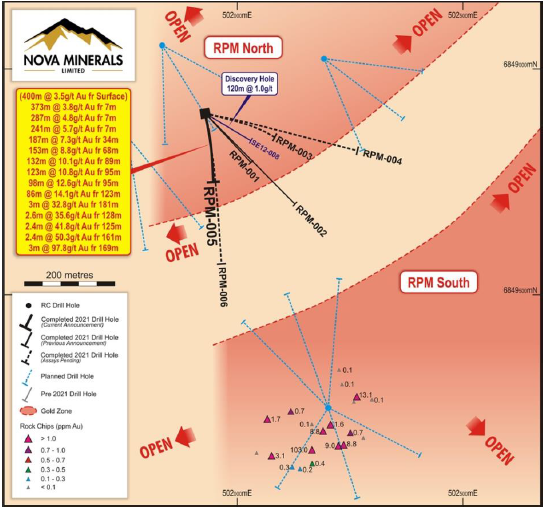 Mr Christopher Gerteisen, CEO of Nova Minerals, informed that the results from three holes at RPM North are still under process and the same will be released in the coming weeks. Once all the intercept results are received, the data from the entire RPM North drilling campaign will be sent to an independent consultant to prepare the maiden Inferred Resource.

“This marks a major milestone for Nova Minerals. RPM is now confirmed to be the second significant project development area at Estelle and will be a key component of our ongoing resource development work on our path towards production at the Estelle Gold Project. This is what unlocking a district looks like, and we will continue to do so with Korbel and RPM representing only 2 of 15 known prospects with the wider Estelle Gold Project claims. In addition to these, there are numerous unnamed colour anomalies across our 324km2 claim block”, Mr Gerteisen commented. 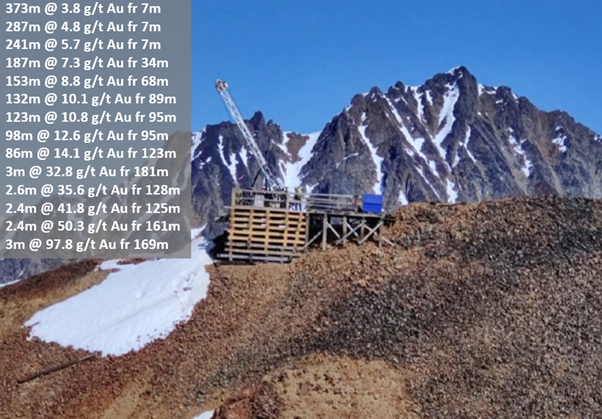 Nova will mobilise at least two drilling rigs at RPM in the next round of drilling. One rig will be allocated towards the drilling operations on RPM South, which Nova believes will converge with RPM North at depth.

Nova has another successful field season in 2021

Nova’s reconnaissance exploration teams have had a wonderful exploration season in 2021. Two more significant discoveries were made during the season- Stoney prospect and Train-Shoeshine area. The Stoney prospect has exhibited an extensive polymetallic Au-Ag-Cu Stacked Vein System, which brings diversity to the resource base of the project. On the other hand, the Train-Shoeshine area has shown the potential for an intrusive related gold system.

Nova will continue to systematically explore these prospects and advance with its recon operation to further delineate gold discoveries.

The Estelle Project has a proven mineral resource of 4.7 Moz – that too entirely from the Korbel Main deposit. Nova’s endeavor to upgrade Korbel Main resource and maiden resource from RPM will boost the resource potential of the entire project. The recent discoveries, including Stoney and Train-Shoeshine, are likely to add more lustre to the project’s gold potential.