Developments are on right track at Australia-based Platina Resources Limited (ASX: PGM), which is focused on building a gold portfolio in proven Australian provinces.

In line with its “Going for Gold” strategy, the Company is set to sign a conditional term sheet for the acquisition of Xanadu Gold Project, further expanding its gold presence in the tier 1 mining jurisdiction of Western Australia. 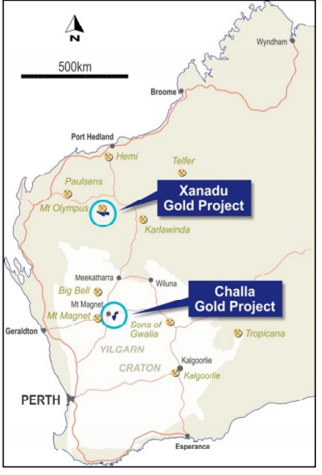 The project is 38km southeast of Paraburdoo and 95km south of Tom Price. The region offers excellent infrastructure and services to support exploration, mining, and project development.

The project sits within the Ashburton province, 7km west of the multi-million-ounce Mt Olympus gold deposit explored by Kalamazoo Resources Limited (ASX: KZR). The deposit has past production of 350,000 ounces of gold and resources of 1.65 million ounces (Moz), resulting in a total of 2Moz gold endowment.

Xanadu has a large alteration system hosted within carbonates prospective and sediments. These are prospective for intrusion-related gold mineralisation such as the Hemi discovery of De Grey Mining Limited (ASX: DEG) and the Telfer Gold Mine of Newcrest Mining Limited (ASX: NCM). The project has strong similarities with the Carlin gold deposits in Nevada, US.

What is in store for Xanadu?

The project has added critical mass to the company’s gold portfolio at a low acquisition cost, according to Platina Managing Director Corey Nolan. 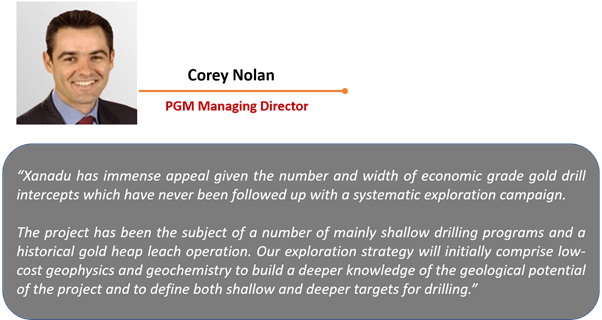 Platina believes that there is huge potential to expand the known oxide mineralisation. However, the company considers the longer-term prize is in targeting primary mineralisation within the alteration core of the system, which has never been tested by drill programs in the past. 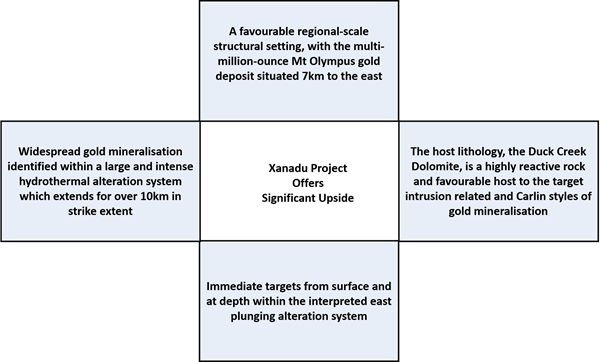 Initially, the company plans to complete geophysical work such as detailed gravity, orientation IP, electromagnetics and magneto-telluric surveying, which have not been previously carried out. The data generated, along with historical information, is expected to enable a project-wide evaluation of the mineral systems gold potential, as well as identify priority targets for immediate assessment.