Musgrave Minerals Limited (ASX:MGV) is grabbing interests on the back of solid exploration potential at its Cue Gold project. The recent drilling programs at Cue met with impressive gold assays, widening the glittering footprint in the yellow metal market.

The significant development comes amid the recent surge in the gold prices, making MGV shares more lucrative for investors. The Musgrave share price has skyrocketed by over 200% in the past year, is trading at A$0.310 on 19 February 2021 (1:01 PM AEDT).

As the Company continues to tick off significant gold exploration milestones, let us explore its broad objectives and the critical elements of its striking project portfolio.

Musgrave Minerals has been focused on growing the gold resource inventory at the Cue project through systematically testing targets and making new discoveries. Advancing in the same direction, the Company has embarked on the rigorous exploration of Cue exploration grounds, and several undertakings are in the pipeline.

Striving for the standalone gold operation, Musgrave has commenced Prefeasibility Studies at Break of Day/Lena deposits at Cue, in order to chalk out a clear path to production. The project is surrounded by significant gold producers such as Silver Lake, Ramelius and Westgold. Moreover, the current robust road infrastructure supports trucking of high-grade ore to long distance and Musgrave has also received mining proposal approval. Meanwhile, the Company also intends to define a large economic gold system at Lake Austin Evolution Joint Venture.

Extensive Resource Base at Break of Day 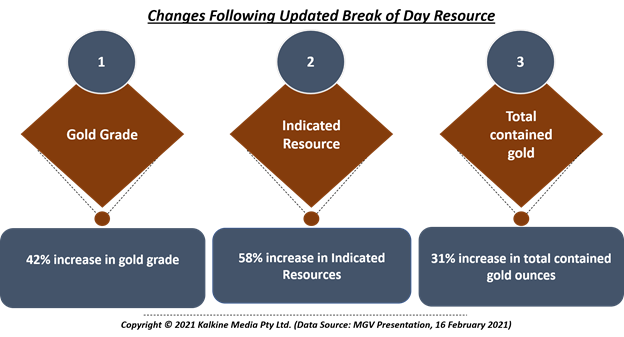 It is noteworthy to mention that 85% of the total Break of Day resource is contained within five gold lodes, and geological model interpretations have demonstrated repetitions potential. The exploration at Break of Day deposit is encouraged by opportunities for discovery amid the opening search space.

The Company is currently focussed on unearthing high-grade ounces at shallow depths and has commenced a Pre-Feasibility Study.

The first pass aircore drilling identified more than 20 regional targets on the grounds of Cue, thereby expanding the search space for gold mineralisation. The paradigm shift with the new discoveries has catalysed the exploration momentum at Cue.

The Company has identified high-grade gold on six targets so far while further assays are awaited. Musgrave has kicked off follow-up aircore/RC drilling on new targets spanning over more than 25,000 metres.

New White Heat Discovery or Target 2 has been quite significant for Musgrave and is situated 300 metres south of White Light. The drilling at White Heat intersected high-grade intercepts present under the hardpan cover of 2-3 metres. No historic drilling is associated with the target, where Musgrave is currently undertaking the follow-up drilling.

Metallurgical tests have yielded outstanding results for samples from Break of Day and Lena deposits, with 96-99% total gold recovery through the usage of conventional gravity and CIL processing. It has been backed by high gravity recoveries in fresh rock (over 70-80%). Furthermore, total CIL recovery of 98-99% is witnessed from Preliminary test work at Starlight.

The metallurgical results suggest reduced processing costs with the low use of reagents. Meanwhile, no harmful elements have been identified in the process.