Musgrave Minerals Limited (ASX: MGV) has concluded the June Quarter of 2021 with a flurry of initiatives and significant results. The Australian resources company is dedicated to gold exploration as well as development at the Cue Project in Western Australia. The Cue Project’s key deposits include Break of Day and Lena, which boast significant gold mineralisation.

During the quarter, Musgrave advanced its regional exploration drilling on wholly owned Cue tenure while the exploration initiatives progressed significantly at Lake Austin, a part of a joint venture with Evolution Mining Limited.

As part of regional exploration drilling, a total of 169 Reverse Circulation (RC) holes were completed for around 17,300m of drilling across multiple areas. In addition, the Company also completed 15 diamond drilling (DD) holes over an advance of around 1,973m for the purpose of metallurgical testing, exploration, and geotechnical studies. 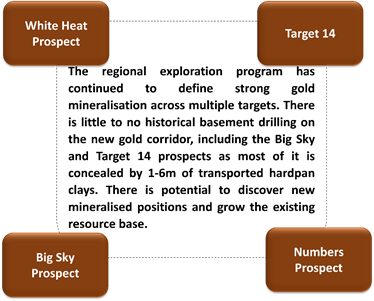 With this backdrop, let us look at key areas that remained the focus of Musgrave’s exploration in the June Quarter.

White Heat is located 300m south of Break of Day and has a strike extent of ~70m. Musgrave has completed three diamond drill holes at White Heat with assays pending. 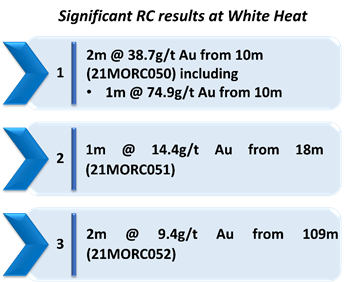 Aircore drilling has continued to define regolith gold mineralisation over a continuous trend extending for 2.6km. At Big Sky, MGV has completed one diamond drill hole, with assay results awaited. In addition, RC drilling is underway at the prospect. 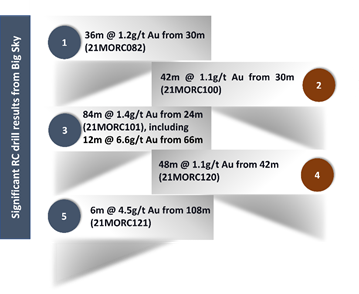 Target 14 sits 800m north of the Big Sky prospect, with aircore drilling extending the anomalism to more than 3km of strike length. Target 14 forms part of a new 7-km long corridor, which is present 1.2km southwest of Break of Day.

Numbers Prospect could be satellite pit

With an Inferred Resource of 278,000t @ 2.46g/t Au for 22,000oz gold, the Numbers Prospect seems to have the potential to become a satellite pit to a larger development at Break of Day/Lena.

The Company drilled 22 resource definition RC holes at the prospect aimed at confirming mineralisation continuity and improving the resource estimate to the higher confidence Indicated category. These RC holes are spaced on around 20m x 20m grid. The mineralisation intersected in most drill holes is consistent with the existing model.

The Lake Austin area, which is significantly underexplored, is highly prospective for gold. Musgrave is currently managing the exploration with Evolution Mining providing solid technical input.