Musgrave Minerals Limited (ASX: MGV) has announced strong basement gold mineralisation at the West Island prospect, identified during the diamond drilling on the Cue Joint Venture. The Company holds a joint venture over Lake Austin with Evolution Mining Limited in the Murchison district of Western Australia.

The gold intersections stretch over a 400m strike length below a strong regolith gold anomaly under Lake Austin. The mineralisation is hosted within a differentiated dolerite unit, like that hosting the high-grade Great Fingall and Golden Crown (combined 4.4Mt @ 14.1g/t Au for 2.0M oz Gold) deposits, located 25 Km north of West Island at Cue.

Two phases of regional aircore drilling have been completed under the Evolution Joint Venture, which commenced in October 2019. The drilling program consisted of 436 holes for 48,895m, with aircore drilling defining basement targets for a focused 2,720m.

The diamond drilling program that consisted of seven holes completed in May 2021 and tested regional gold targets, churning out very encouraging results at the West Island target.

Snapshot of the Drilling Results

Four diamond holes were drilled at West Island over a strike length of 400m, with all returning significant gold intercepts including:

Multiple gold mineralisation zones have been intersected by all the four drill holes at Western Island, with mineralisation hosted within a differentiated dolerite unit having a strike length of multiple kilometres.

The intersections are associated with extensive regolith gold mineralisation extending for over 7km of the strike, as shown by aircore drilling. So far, the diamond drilling program at West Island has only tested an area of 400 square kilometres with early structural data interpretation highlighting several gold lodes striking parallel to each other. The mineralisation at West Island remains open along strike and at depth.

In other target areas, the regional program also returned anomalous gold from the current aircore drill holes, thereby highlighting the possible proximity to basement gold mineralisation as well as the requirement for further basement drill testing.

The positive outcomes from early-stage basement drilling have proven quite encouraging for the joint venture partners. Following the promising results, Evolution has committed an additional A$5 million in exploration work over the next 12 months, focusing on over 7000m of additional diamond drilling at West Island and other basement targets.

Moreover, knowledge developed from the work so far would be used for undertaking a further 25,000m of aircore drilling to define new targets. The results are being integrated with existing datasets for defining final targets for the new diamond drilling program, which is planned to kick off in early July. Further aircore drilling would be undertaking in late July.

Ongoing Exploration on the Cue Project

On Lake Austin, follow-up drilling is planned to restart in July. Meanwhile, another aircore drilling phase is expected to commence in late July for defining additional targets for basement diamond drill testing. 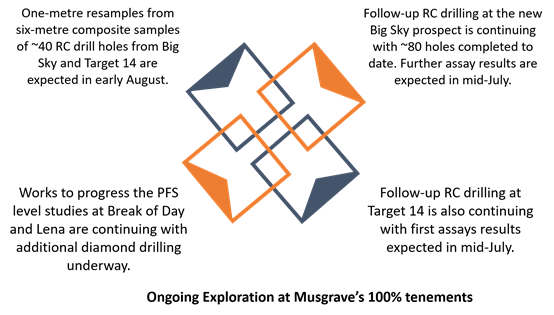