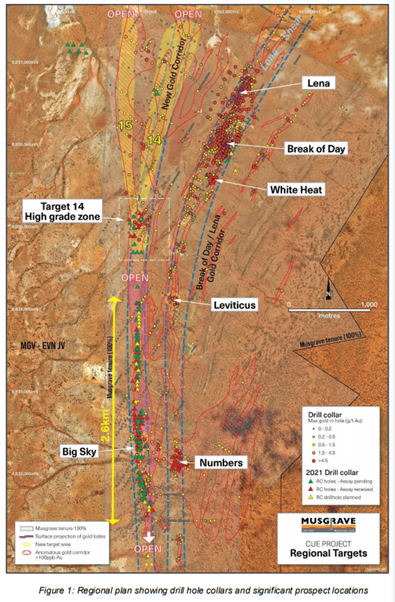 He added that currently, only broad-spaced drilling (100m to 200m spaced holes) had returned results, with assays received for generally only single RC drill holes on most traverses.

He also indicated that within higher-grade areas, drill traverse line spacing is also being filled with multiple drill holes on each traverse, either planned or drilled.

Mineralisation at the Big Sky Prospect

The Big Sky gold anomaly is defined over a 2.6 kilometer of continuous strike. Musgrave has received six-metre composite samples for additional 19 RC drill holes in the current program, including 12 holes at Big Sky and seven holes at Target 14. Significantly, initial holes are spaced on traverse lines of 100m to 200m.

RC drilling is currently underway at Big Sky. It is undertaken for testing the grade, continuity, and down-dip extent of the mineralization both in oxide as well as fresh basement rock. The continuous and extensive gold mineralisation backs the potential of the Big Sky Prospect to adding to Musgrave’s existing resource base at Cue.

Anomalous gold results at the Target 14

Target 14, 800m north of Big Sky, has anomalous gold defined over a continuous strike of 300m where mineralisation is open to the south.

Furthermore, the Company has submitted one-metre samples from anomalous gold composites for individual analysis, with results expected in August-September. 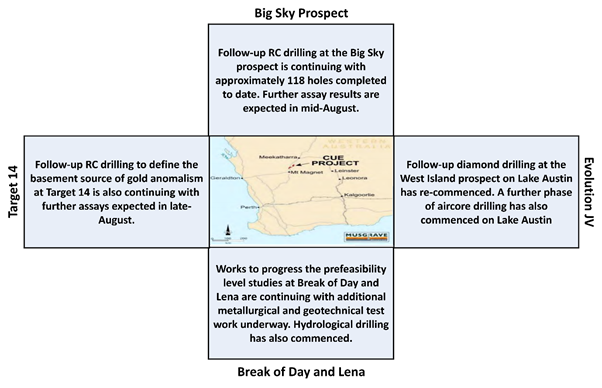 In addition to ongoing drilling, anticipates one-metre resamples from six-metre composite samples of ~45 RC drill holes from Target 14 and Big Sky are anticipated in late August.