Shares of heavy mineral sands (HMS) explorer MRG Metals Limited (ASX:MRQ) were trading up by over 18% at AU$0.009, towards end of the trading session on 16 July 2021. The significant uptick was likely propelled by an upbeat market update that revealed assay results from 17-hole aircore infill and extension drilling program at Nhacutse.

Nhacutse is one of the 13 High to Very High-Grade mineralised’s targets within MRG Metals’ Corridor South exploration license which is located in world-class Mozambique.

The 17-hole aircore program (along 3 more twin holes) was conducted on and between two high to very high-grade zones, where very high THM assay grades were returned from previous hand auger and aircore drilling programs. Excellent statistical correlation results for the internal laboratory repeat samples, the inserted standards, and the site duplicate samples, were found.

“Nhacutse could deliver an MRE as good, if not better than our maiden MRE at Koko Massava,”, says Chairman Mr Andrew Van Der Zwan.

What did aircore assays at Nhacutse confirm?

The assay results confirmed a 3.5 sq km mineralised footprint of very high-grade HMS, open at depth. They also confirmed the recently announced Leapfrog modelling of assay and VIS EST aircore data that had established the potential at Nhacutse for approximately 140 million cubic metres (Mm³) at >5% THM, with higher internal-grade potential.

This represents an excellent opportunity for the Company to supply a +100 Mt of very high-grade resource to the Corridor inventory at THM grades higher than its existing JORC-compliant Koko Massava Resource, thus with higher grade than from the Koko Massava MRE of 1.423 Mt @ 5.2% THM. 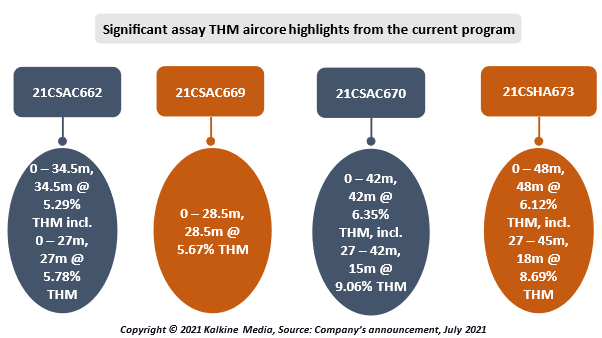 All holes are mineralised from surface and were dry with no water table intersected downhole. High-grade mineralisation in some holes remains open at the bottom of hole, particularly to the east, as shown on the section. 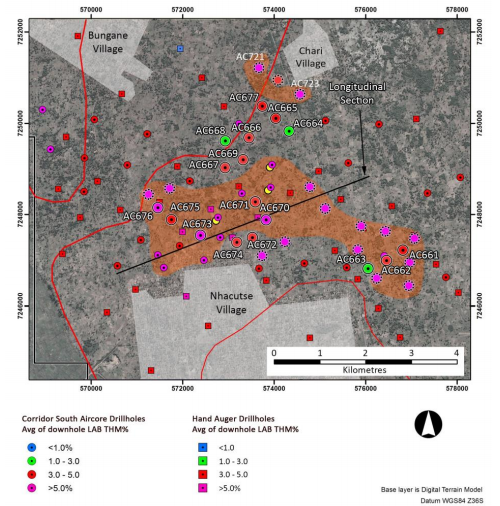 Notably, the Company can achieve significant tonnage at greater than 6% very early in the process, via mine optimisation, with the Nhacutse mineralisation commencing at surface and the higher-grade average being reported.

MRG Metals will now start the tendering process to complete MRE’s across the Corridor Projects.