The Company has now applied for a new HMS exploration license in the region- Corridor North (10779L). This will add to the existing portfolio of Corridor Central (6620L); Corridor South (6621L); Marau (6842L) and Marruca (6846L), with the Linhuane (7423L) licence still under application.

“This is an excellent addition to our portfolio”, says Chairman Mr Andrew Van Der Zwan. 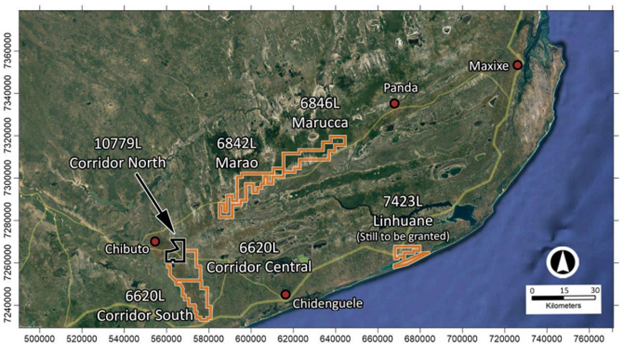 The new Corridor North (10779L) ELA covers an area of 8,037.49 Ha. It is located north of, bordering the Corridor Central (6620L) licence, which holds the significant Koko Massava JORC Resource (1.4BT @ 5.2% THM). Interestingly, the mineralisation of Koko Massava remains open towards the north and is interpreted to extend into the southern part of the Corridor North licence.

Not only is the new Corridor North (10779L) ELA continuous with MRG’s existing Corridor Sands Licences, but it also contains an extension to the Koko Massava expansion drilling program. Notably, this program has identified high-grade zones and sits southeast of known ore bodies in the property to the Northwest.

Corridor North ELA is within the same paleo dune system that stretches from the Dingsheng Minerals Corridor 1 Project eastward to MRG’s Marao (6842L) and Marruca (6846L) licences. The Corridor 1 deposit, combined with the positive initial results from Marao, clearly shows the potential of Corridor North ELA in this paleo.

MRG Metals is already developing scalable projects at High Total Heavy Minerals (THM) grades from the surface with potential long mine life. It has always been vigilant of the near term opportunity of identifying multiple very high-grade resources to turbocharge economics into the feasibility phase. 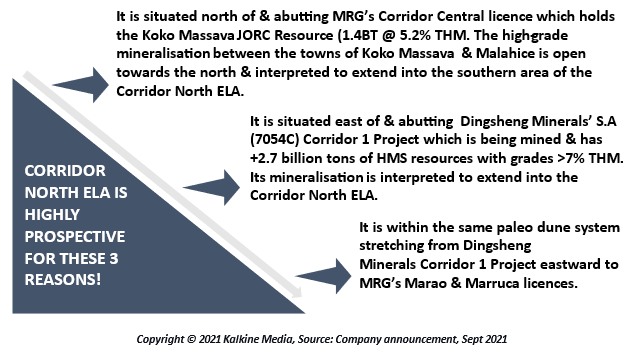 Currently, MRG’s application for the new Corridor North (10779L) ELA is under review by the relevant departments.

Chairman Andrew suggests that it could take time for the application to be granted. The Company will, however work with the Government such that time frames would be consistent with future development plans in the Corridor sands project over the next two to three years.