Mount Burgess to determine the host mineral for Germanium

Mount Burgess Mining NL (ASX: MTB) has couriered around 6.6kg of 1/2 HQ diamond core to the Geological division of the University of Tasmania on receiving drill core from Botswana. The drill core will be subject to mineralogical test work to determine the host mineral for Germanium (Ge).

These drill cores are from three holes drilled in 2017 within the oxide zone of the Kihabe Deposit, situated on the Company’s current Prospecting Licence PL43/2016.

Recent mineralogical test work highlighted the likeliness of Ge to be associated with iron hydroxides, requiring specialised test work which can be undertaken by the University of Tasmania.

Germanium has not been included in any previous resource estimates undertaken on Kihabe or Nxuu deposits. Assaying for Ge has only been conducted on recent drilling. Since potential for Germanium represent significant credit for both the polymetallic deposits (Kihabe and Nxuu), the Company plans to include assays for Ge in all current and future drill samples.

1/2 HQ was selected from the following drill core intersections at Kihabe Deposit: 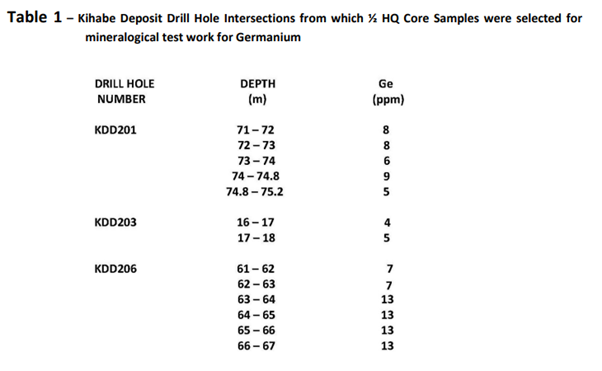 As per Kitco Strategic Metals, Germanium is currently trading at US $2,119.50/kg. Germanium, a silvery-gray metalloid has applications around diverse fronts. In 2018, Ge was added to the list of strategic minerals and metals critical to the USA.

Germanium is added to the silica glass core of fibre optic cables in fibre optic system, resulting in significant increase in their refractive index while signal loss is minimised over long distances. Moreover, Ge is used in producing infra-red imaging devices, such as windows, camera lenses and optical lenses. These devices can be used in night vision systems and defence applications.