ASX-listed explorer of diverse commodities, Mount Burgess Mining NL (ASX:MTB) is making exploration headway at its Nxuu polymetallic deposit on the Nxuu-Kihabe Project, Botswana. Significantly, the drilling contractor has confirmed that the drilling crew kicked off mobilisation from Gaborone in eastern Botswana on Wednesday. The crew is expected to arrive on site soon.

Triggered by the significant update, MTB shares soared 16.6% from the previous close on Thursday. Mount Burgess traded at AU$0.007 on 7 October 2021.

The recent developments are advancing as per the expectations of the Company, which in late September 2021 stipulated the commencement of drilling at the Nxuu deposit once the drill crew returned from Botswana’s Independence Day celebrations. Mount Burgess had also confirmed the arrival of a drill rig on site. Meanwhile, the contractor was engaged in August this year by Mount Burgess (Botswana) Pty Ltd, a wholly owned subsidiary of Mount Burgess Mining to commence to commence a further drilling programme at the deposit. 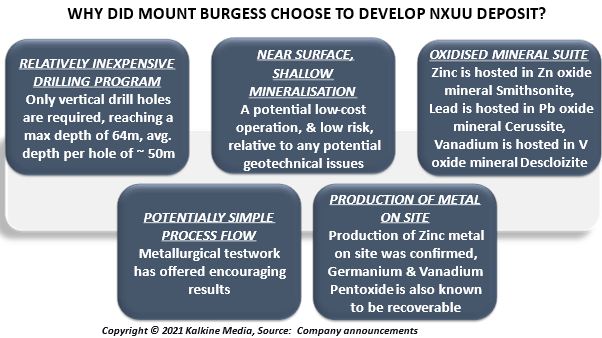 An overview of the drilling programme

Meanwhile, in the Southwest zone, 14 HQ diamond core holes are planned, for an advance of ~ 800 metres, with an average depth of 57 metres per hole. Notably, depths of intermediary holes previously drilled have been used to estimate all proposed drill hole depths to barren dolostone basement.

Furthermore, the Company will use both HQ and PQ core to determine ore operating characteristics to advance the process route to a Pre-feasibility study, including-

Resource estimate on the charts

Mount Burgess believes that the completion of the drilling programme would pave the way for the estimating the Indicated/Measured resource, compliant with the 2012 JORC Code. Henceforth, the Company plans to conduct confirmatory metallurgical test work, leading to a Pre-feasibility study.

ALSO READ: This is how Mount Burgess is developing Nxuu-Kihabe Project