Mount Burgess Mining NL (ASX: MTB) enjoys the exposure to diverse mineralisation at the Nxuu and the Kihabe polymetallic deposits in Botswana. At Kihabe, the Company appears to up the ante to unveil its strong potential.

The announcement for the north-east (NE) domain comes after the data compilation concerning associated mineralisation within the south-west (SW) silver domain.

Mount Burgess compiled a table, charting the metres and grades of Ag/Zn/Pb/Cu/V2O5 mineralisation for each drill section involved. The compilation, aimed to quantify the mineralisation extent, is associated with silver in the NE domain.

Overview of silver domains at Kihabe

The 2.4-kilometre-long mineralised strike of the Kihabe Deposit consists of an SW silver domain and a NE silver domain. 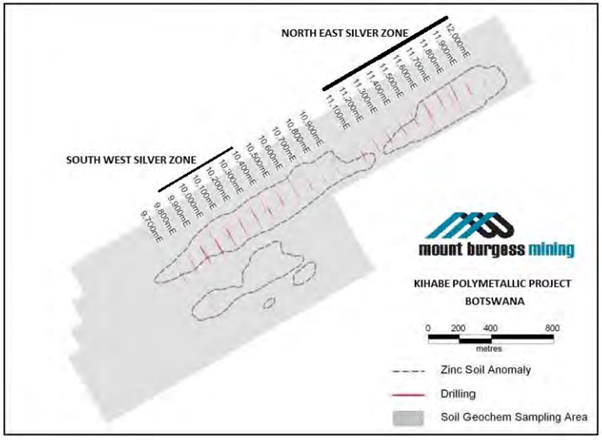 Mount Burgess is currently designing a proposed drilling programme for the Nxuu Deposit, situated seven kilometres east of the Kihabe Deposit. Nxuu Deposit’s mineralisation occurs in a flat-lying basin-shaped structure, and is totally oxidised. Metallurgical testwork conducted on the Nxuu deposit has shown the recovery of significant minerals like zinc and lead.

The Company is planning a HQ diamond core drilling on 60 vertical drill holes for a total advance of 2,600 metres. The drilling plan is dependent upon an average depth to the base of mineralisation of 43 metres per hole in the Nxuu Deposit.

Results from the drilling programme may help Mount Burgess in quoting a 2012 JORC Code-compliant Indicated/Measured Resource. Along with additional confirmatory metallurgical test work, the assay results would facilitate Mount Burgess to advance to a Pre-feasibility study.