The drilling conducted so far has indicated that typically 54% of the 28 drill hole lengths consist of mineralisation above the cut-off grade. Meanwhile, 17.5% is Kalahari sand cover, and 28.5% is low grade or barren quartz wacke.

Notably, 22 holes from the 28 holes drilled have been assayed for Vanadium, with results released to the market. The planned drilling has been divided into a NE Zone, a NW Zone and a SW Zone. 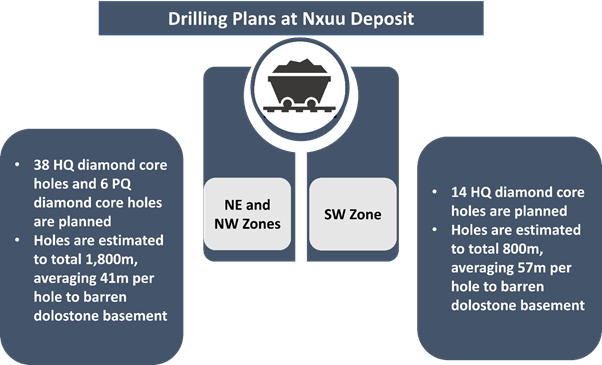 The current 2004 JORC Code compliant Nxuu resource estimate, only includes grade estimates for Zn/Pb/Ag and does not fully represent the known mineral endowment of the Nxuu Deposit. For instance, subsequent drilling conducted in 2018 also included assays for V and Ge, with both the mineralisation showing likeliness to represent significant credits for the Nxuu Deposit.

Mount Burgess Mining conducted a detailed assessment of geochemical soil sampling and data from 28 holes drilled to date, enabling the Company to estimate depths to the base of mineralisation and identify the overall mineralised domain of the Nxuu Deposit.

Drilling at the Nxuee Deposit commenced in mid-October 2021. After concluding the current drilling programme, the Company expects to estimate an Indicated/Measured resource compliant with the 2012 JORC Code. Subsequently, confirmatory metallurgical test work would be undertaken, leading to a Pre-feasibility study.

The Company has also undertaken mineralogical and metallurgical test work, which have confirmed the presence and recovery of zinc and vanadium.

The Company intends to use both HQ and PQ core to determine operating characteristics of the minerals involved to progress the process route to a Pre-feasibility study. It includes:

Mount Burgess also reported that with Germanium currently trading at US$2,112/kg, it plans on identifying the host mineral followed by metallurgical test work to determine the mineralisation recoverability on site. As part of its plan, 12 kilograms of drill core from the Kihabe Deposit oxide zone containing Germanium with grades ranging from 7g/t to 11g/t have arrived in Australia. The drill core would be subjected to mineralogical testworks.

How is Stratiform helping businesses succeed?