Mount Burgess Mining NL (ASX: MTB) has announced the June 2021 Quarter report, which shows significant progress made at its Kihabe polymetallic deposit in Botswana. Significantly, many of these mineralisations are witnessing market tailwinds, encouraging the Company to undertake detailed exploration and review.

As a result, the Company has also planned a drilling programme to be undertaken at the Nxuu Deposit, with discussions with drilling contractors ongoing.

Let us look at key initiatives that defined the June Quarter both at the operational and corporate front.

Proposed drilling to be conducted at the Nxuu deposit

Mount Burgess intends to firstly develop the low-risk, basin-shaped, shallow, and totally oxidised Nxuu Deposit. The Company has drilled 33 vertical holes so far into the Nxuu Deposit mineralised domain over an advance of 1,304 metres.

The outcomes from ALS Laboratories and Naples University established vanadium oxide Descloizite as the host mineral for Vanadium in the Kihabe Deposit oxide zone. Notably, Vanadium is 1.785 times the volume of Vanadium in Descloizite.

Previous metallurgical test work undertaken on the oxide Descloizite from the totally oxidised Nxuu Deposit has demonstrated up to 80% on-site recovery of Vanadium Pentoxide through gravity separation, floatation of tails and use of hydroximate acid.

Metallurgical recovery test work has yet to be conducted on V2O5 from the Kihabe Deposit oxide zone.

Following the confirmation of Descloizite as Vanadium’s host mineral in the oxide deposit of Kihabe deposit, Mount Burgess Mining can indicate the association of V2O5 grades with the separate Zinc, Lead, Silver and Copper grades.

Moreover, the sulphide zone of the Kihabe deposit has also returned vanadium intersections, with mineralogical test work remaining to determine the host mineral.

With the recent increase in the copper price, Mount Burgess indicated how copper, which was never included in the previous JORC resource estimates, can add credit to the Kihabe deposit.

The Company reported that copper intersections in the Kihabe Deposit Oxide and Sulphide Zones are associated with any separate zinc, lead, silver, and vanadium/V2O5 intersections.

The projected demand for silver required for solar panels has led to an increase in the silver price. As a result, the Company highlighted the contribution of silver to the Kihabe deposit. Silver intersections in the Kihabe Oxide and Sulphide Zones are shown to be associated with any separate zinc, lead, copper and vanadium/V2O5 intersections.

Data compilation from various zones of the Kihabe deposit 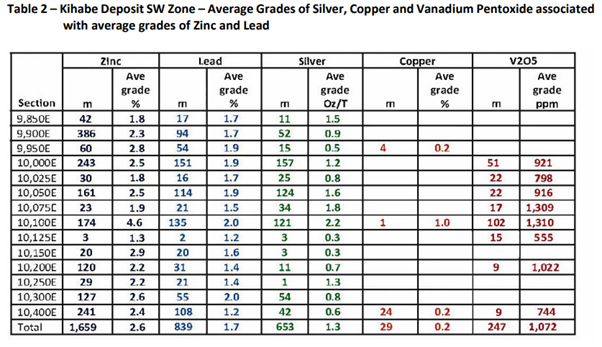 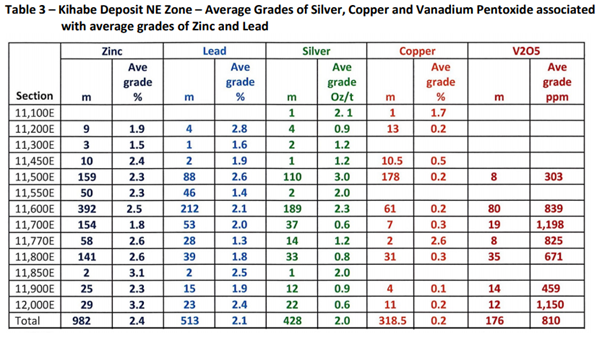 The Company has now combined all the relevant drill holes involved to separately show mineralised intersections and grades for both the SW zone and the NE zone for all of zinc, lead, silver, copper and vanadium pentoxide.

Mount Burgess raised over A$0.693 million during the quarter through the placement of around 99 million shares. The Company reported cash and cash equivalents of A$ 604,000 at the end of June quarter 2021.

Subsequent to the end of the quarter, Mr Robert Brougham was appointed as a Non-Executive Director to its Board. He has vast international experience in polymetallic and base metal deposits and holds in-depth knowledge of the Kihabe-Nxuu project. Moreover, Mr Jacob Thamage, with intimate knowledge of the Botswana mining industry, was appointed to the Board of Mount Burgess (Botswana) Pty Ltd.

DETAILED DISCUSSION AT: Mount Burgess (ASX:MTB) enriches its board with new additions to advance Kihabe-Nxuu project