Mount Burgess Mining NL (ASX:MTB) is focused on expediting progress at its Botswana-based Kihabe-Nxuu polymetallic project hosting zinc, lead, silver, copper, vanadium, and germanium. In line with its key objectives, the Company has made a strategic move of reinforcing its board with the appointment of new members, who would drive the project’s progress during COVID-19 restrictions and beyond.

The Company is designing a proposed drilling program for the Nxuu Deposit, which lies seven kilometres east of the Kihabe Deposit.

Let us look at the recent board changes undertaken by the Company.

The Company has onboarded Metallurgist Robert Brougham as a Non-Executive Director to its Board, effective 7 July 2021.

Mr Brougham is a Fellow of the Australian Institute of Mining and Metallurgy (FAusIMM) and holds a BSc in Mineral Processing/Process Control. He boasts extensive experience in commissioning, plant operations as well as maintenance of several base metal projects located in Australia, Zambia, Indonesia and Eritrea.

What’s more, he has an in-depth knowledge about the Kihabe-Nxuu project since he has worked as the principal metallurgist for all metallurgical test work undertaken on the project by ProMet Engineering. The testwork confirmed zinc metal recovery on-site from the zinc oxide minerals Smithsonite (Nxuu Deposit) and Baileychlore (Kihabe Deposit).

Jacob Thamage, the latest addition to the Board of Mount Burgess (Botswana)

Jacob Thamage, a mining engineer who hails from Motswana, was appointed to the Board of the Company’s wholly owned subsidiary, Mount Burgess (Botswana) Pty Ltd.

Thamage previously served as the Chief Mining Officer for the African Development Bank in Abidjan (Cote D’Ivoire). Before that, he was Deputy Permanent Secretary at Botswana’s Ministry of Minerals, Energy and Water Resources.

In May 2010, he held the position of Coordinator of Botswana’s Diamond Hub, where Thamage coordinated the relocation of DeBeers’ diamond sales functions from London to Gaborone in Botswana. 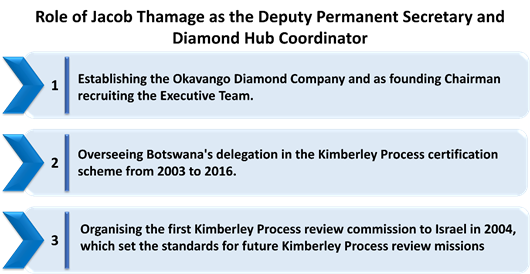 Meanwhile, Chris Campbell-Hicks has stepped down due to work commitments as Principal Metallurgical Consultant to Sedgeman Pty Ltd. He was a Non-Executive Director of Mount Burgess Mining and its wholly owned subsidiary Mount Burgess (Botswana) Proprietary Ltd. The MTB team thanked him and his wife for their contribution in investigating the metallurgical recovery processes for the project.