Notably, in addition to the above-mentioned elements, the Kihabe-Nxuu Project also contains germanium, as highlighted by the recent testwork conducted to identify the host mineral of germanium.

Germanium can prove quite significant for the project’s growth potential owing to its applications in a wide array of areas. It has positioned the Company in a dominant spot to leverage exciting market prospects.

Germanium has served as one of the powerhouses when it comes to driving the growth of semiconductors, often used in transistors and other electronic devices. Germanium is also considered a technology-critical element due to its vitality in emerging technologies and advanced engineering applications.

DO NOT MISS: Why mineral development in Botswana is the ideal choice for Mount Burgess

The increased usage of thermometers during the COVID-19 outbreak has boosted germanium demand from the infrared sector. Moreover, the rapidly growing 5G telecommunication sector has further intensified the demand for germanium in recent years.

The recent uptrends are expected to exert pressure upon the existing germanium supply and may have a domino effect on germanium prices.

The test work conducted by the Department of Geosciences at Naples University, Italy, has confirmed germanium’s association with iron hydroxide in the Kihabe Deposit, SW Zone. The Company has indicated the need for further test work on the iron hydroxide portion to ascertain the host mineral for germanium. 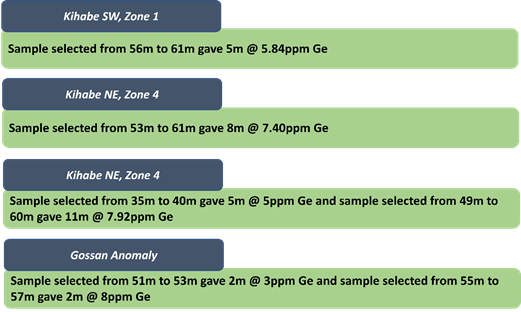 Further assays have also been conducted to test for germanium on selected drill hole intersections without assaying the core samples of the entire drill holes. All the selected intersections confirmed the presence of germanium.

Mount Burgess has suggested the potential requirement for further drilling on the Kihabe Deposit, the Nxuu Deposit, as well as the Gossan anomaly. In addition, the company has also highlighted the need for assaying for germanium to confirm the overall contribution the element is set to make to the project.

Australian Open is happening in the metaverse

Upcoming mining and exploration IPOs in 2022