A leader in battery-material processing technologies, Lithium Australia NL (ASX: LIT) is going from strength to strength in the sustainable battery space on the back of its remarkable progress supported by the buoyant market scenario. The Company’s focus on creating a circular economy for battery materials would increase energy security for the battery industry.

The funding position of Lithium Australia remains strong, with no debt and AU$13.3 million in cash, as of 31 March 2021. During the March 2021 quarter, the company raised a total of AU$$5.84 million by the issue of fully paid shares. LIT received AU$804,000 from research & development (R&D) rebates during the reported period.

Meanwhile, impressive progress during the quarter pushed the LIT stock price to a 2-year high, with substantial trading volumes.

Let us look at LIT’s key developments across various fronts during the March Quarter.

Envirostream, which is 90% owned by LIT, is a provider of sustainable solutions to dispose end-of-life (EOL) batteries and revive energy metals recovered from spent lithium-ion batteries (LIBs). It is gearing up for increased volumes of such batteries, which would offer operational growth over the next 12 months to cater for the influx.

In the March quarter, Envirostream collected 225 tonnes of EOL batteries, while 35 tonnes of spent LIBs were processed. Total battery recycling revenue for Envirostream for the quarter stood at AU$0.176 million for year-to-date sales of AU$0.606 million.

The Company anticipates that the national Battery Stewardship Scheme (BSS) implementation would significantly increase the volume of EOL batteries available for recycling. Meanwhile, the BSS is also anticipated to improve margins on the company’s recycling operations substantially.

During the quarter, Envirostream’s CAPS (copper, aluminium and plastic separation) circuit was commissioned. Work continues with plastics following separation from copper and aluminium for finding a value add downstream for the mix of plastics.

According to the ITRI LFP market report (November 2020), LFP is predicted to be the fastest-growing sector of the LIB market, with its demand projected to increase 5X by 2030.

Due to the strong battery market outlook for LFP, VSPC has finalised a prefeasibility study (PFS) for LFP cathode production, evaluating several jurisdictions including Vietnam, India and Australia. The study confirmed strong economics for producing VSPC LFP cathode powder. The production would enhance the capacity of 10K tonnes per annum over the three years, expanding nameplate capacity in 2026.

After the quarter, Soluna Australia advised that its 10K Pack HV BESS has been included in the Battery Assurance Program of the Clean Energy Council (CEC). Additionally, a national distributor agreement was finalised with Legend, a privately owned Australian company, which provides professional installers in Australia and New Zealand with market-leading industrial solutions and electrical products.

The LieNA® process is designed to deliver a production route for lithium chemicals, which is not hampered by the ‘conventional’ spodumene converters requirement. 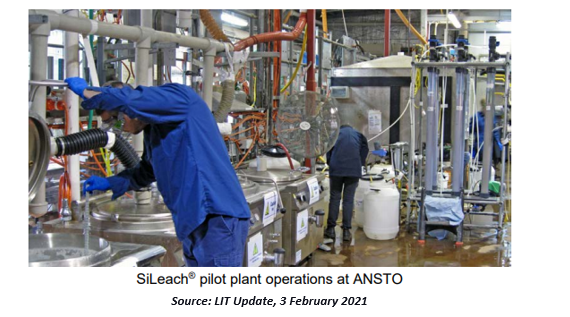 Subsequent to the quarter-end, the first commercialisation and licence agreement was signed with German resources and investment company Deutsche Rohstoff AG. The construction and operation of a LieNA® pilot plant is the next step along the route to commercialisation.

A ‘Notice of Allowance’ was received from the United States Patent and Trademark Office for the Company’s SiLeach® patent application (US 16/076,643). The Company has also received notice of acceptance from IP Australia.

LIT is focused on reducing its exposure to high-risk exploration activities. The company has continued to farm out some of its exploration assets, including majority interests in its Greenbushes South, Coates, Bynoe and Lake Johnson projects.

Galan Lithium Ltd (ASX: GLN) acquired 80% of the company’s Greenbushes South lithium project, which covers an area of 353 square kilometres. The Company granted an option to Charger Metals NL over its Lake Johnston and Coates (Wundowie) projects in Western Australia and its Bynoe project in the Northern Territory.