The stock of Lithium Australia NL (ASX:LIT) shot up 6% higher on 30 June 2021 (AEST 2:08 PM) after the release of an upbeat update on the Company’s proprietary LieNA® technology.

The European Patent Office intends to grant a patent to Lithium Australia for its first-generation LieNA® lithium processing technology. The significant development will provide up to 20 years of legal protection to the technology in nominated European countries from the date of filing (2 August 2017).

The LieNA® technology is designed for significantly improving lithium recovery from fine and low-grade spodumene, which is the most common hard-rock source of lithium. Such recoveries can lower the environmental impact of mining and enhance sustainability.

LIT’s patent application (PCT/AU2019/050773) features the details of its second-generation LieNA® technology. The application was published under the Patent Cooperation Treaty by the World Intellectual Property Organisation and has a priority date of 24 July 2018.

Furthermore, a written opinion on the patentability of the application from the International Searching Authority confirms the novelty and inventiveness of the claims. Accordingly, the application has been lodged in many jurisdictions. 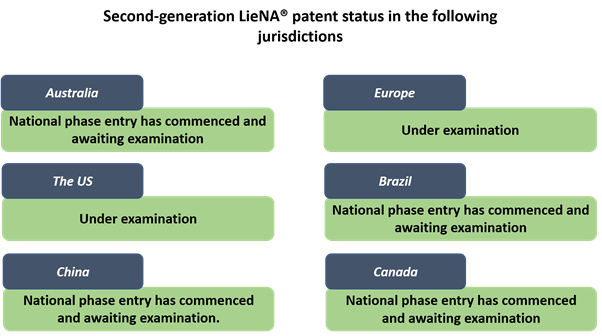 LieNA® comprises a caustic digestion process and subsequent acid leaching to recover the desired lithium chemical. There are significant advantages associated with the LieNA® process.

While conventional lithium chemical production depends on roasting and an acid leach, LieNA® does not involve roasting, making it a more environmentally sound spodumene processing method.

Recovery from fine and low-grade spodumene

Thus, spodumene-considered waste is utilised by LieNA® to produce lithium phosphate, which is used as direct feed in producing lithium-ferro-phosphate (LFB)-type lithium-ion batteries (LIB), with no further chemical conversion required.

Backed by its endeavours in line with high environmental, social and governance (ESG) standards, LIT has earned government recognition. The Company has received federal co-funding through a Co-operative Research Centres Projects (CRC-P) grant for constructing and operating a LieNA® pilot plant, which is valued at AU$3.6 million.

Way forward for the Company

The construction of an autoclave, the principal component of the LieNA® pilot plant, has kicked off in Mumbai, India, with no impact of COVID-19 on the build schedule witnessed so far. The product delivery to Australia is anticipated in October 2021. Meanwhile, the plant construction at ANSTO would be completed by the year-end and would enable the first pilot run.

The pilot plant would generate lithium phosphate, which would be used by the Company’s wholly owned subsidiary, VSPC Ltd, to create LFP cathode powder at its Brisbane facility. The LFP powder will then be used in the production of commercial-format LIB cells for testing.

At the same time, LIT is advancing discussions with several spodumene concentrate producers and lithium chemical manufacturers, who recognise the gap LieNA® could fill, as well as the technology’s potential for commercialisation. Furthermore, the Company has executed a commercialisation agreement with Deutsche Rohstoff AG for issuing an exclusive LieNA® licence in Europe. 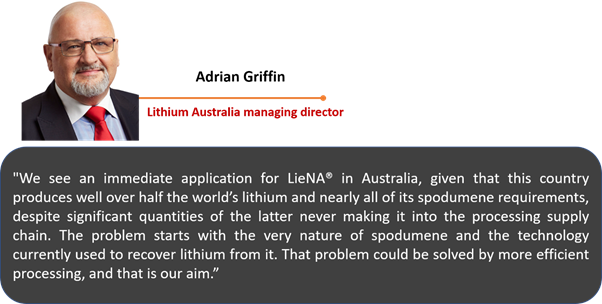