In another significant update regarding its lithium joint venture, Zenith Minerals Limited (ASX:ZNC) has announced the completion of seven wide-spaced RC drill holes at its Waratah Well project in Western Australia.

The Waratah Well project is a part of the company’s recently formed Joint Venture (JV) with EV Metals Group.

The drilling program was conducted to assess the zonation and mineralogy of the pegmatites and to test underneath the outcropping tantalum-rich pegmatites for larger lithium spodumene bearing bodies. 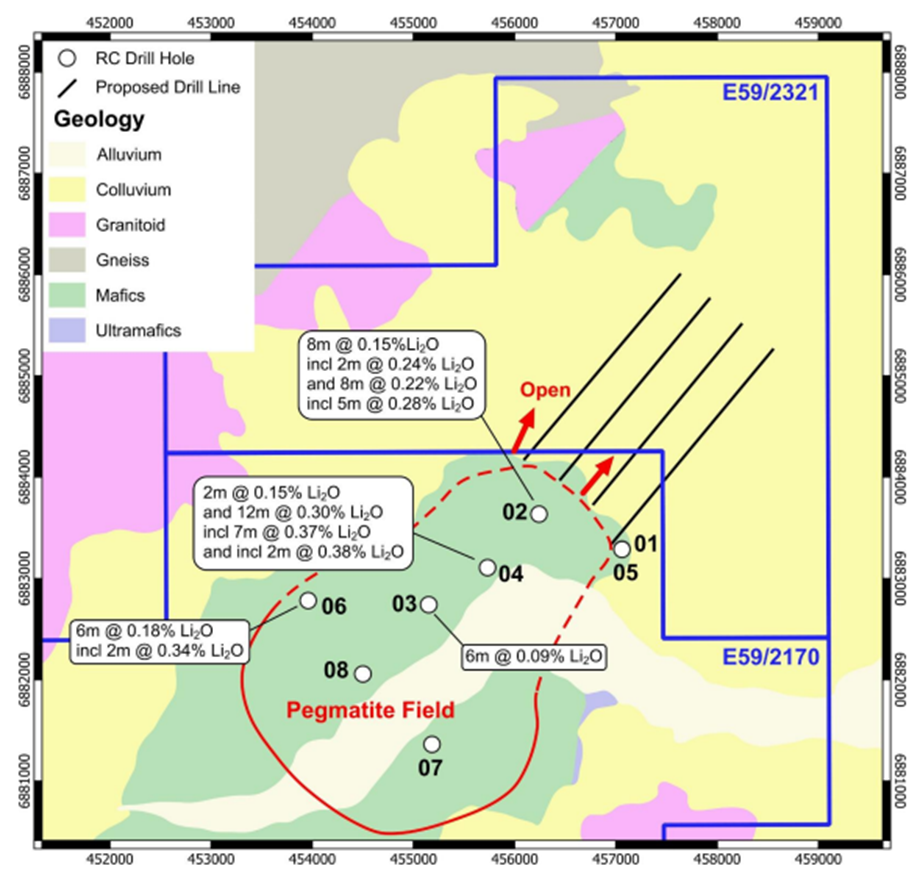 The four holes over the 4km long zone recorded strong anomalous grades of lithium. The two north-western most holes returned:

“The first pass wide-spaced reconnaissance RC drill program at Waratah Well has thrown up some significant lithium drill results, albeit the mineralogy is unexpected. Although neither holmquistite or trilithionite were the target mineral species they do indicate there is abundant lithium within the Waratah Well pegmatites, so much so that lithium mineralisation is pervading out into the basalt host rock and depositing as holmquistite.

These 1km spaced drill holes have given us some significant technical insights into the Waratah Well lithium potential and we’ll now target the areas further north and east of the most lithium enriched drill holes where the pegmatites disappear under soil cover. The drill program confirms a very large, prospective lithium, caesium, tantalum pegmatite field is present at Waratah Well.”

The region north and east of drill holes 004, 002, 003 and 006 is soil covered with no outcrop. The area has been identified as a priority target for RC drilling to test for pegmatites. The RC drilling program is expected to commence in March –April following the completion of heritage clearances.

Three holes recorded intervals of 1m containing up to 9 to 10% of the lithium mineral holmquistite (lithium amphibole). Holmquistite was intersected with subordinate trilithionite (lithium mica), as identified by x-ray diffraction (XRD). Holmquistite is a metasomatic mineral hosted within the altered wall rocks in proximity to some of the renowned large-scale lithium pegmatite deposits including Greenbushes, Mt Marion and Kings Mountain/Piedmont.

So far, the drilling and surface exploration programs have confirmed the presence of a large lithium-caesium-tantalum (LCT) pegmatite field at Waratah Well.  The four most north-western drill hole recorded the highest lithium grades. The planned fences of the near surface RC drilling will test a further 2.5km toward the northeast along the interpreted pegmatite trend.