Lately, the Company has begun fast-tracking the development of its lithium projects across Argentina, on the back of strong market demand for the commodity. The company is focused on its flagship Kachi Project along with the Cauchari, Olaroz and Paso Brine projects.

Lake Resources’ latest step comes after the recent promising update on the Kachi Project, which saw its NPV revised to USD1.6 billion on the basis of 25,500 tpa of high-purity lithium production. Moreover, the company is currently engaged in assessment to expand the production even further.

LKE intends to send lithium brine samples of around 50,000 litres from its Cauchari Project for testing. The groups specialising in the extraction of lithium and conversion of concentrates to lithium hydroxide will be conducting these tests, which would be supported by a scoping study to increase future production.

Besides its flagship Kachi Lithium Brine Project, Lake owns three other lithium brine projects in Argentina, covering 200 km2 of the area in a key location within the Lithium Triangle. For quite some time, LKE has been reporting success at its Kachi Project and has transformed from a lithium explorer to a lithium developer.

LKE has plans to begin the pre-feasibility study work at Cauchari Project, comprising studies regarding environmental impact while drilling for a resource statement is set to commence later in the current calendar year.

Previously, LKE had established several high-grade lithium brines zones at the Cauchari Project via drilling in 2019. The drilling offered validation for similar grades and lithium brines extending into into LKE’s assets from the neighbouring Ganfeng/Lithium Americas JV production development at Cauchari.

All in all, LKE-owned mining leases in Jujuy Province stretch over 47,000 hectares and comprise three projects -  Cauchari, Olaroz and Paso Projects. The Company expects to begin drilling once approval is received for all planned holes. Additionally, LKE expects lithium demand to outstrip supply amid estimates of a substantial supply deficit surfacing from 2024. 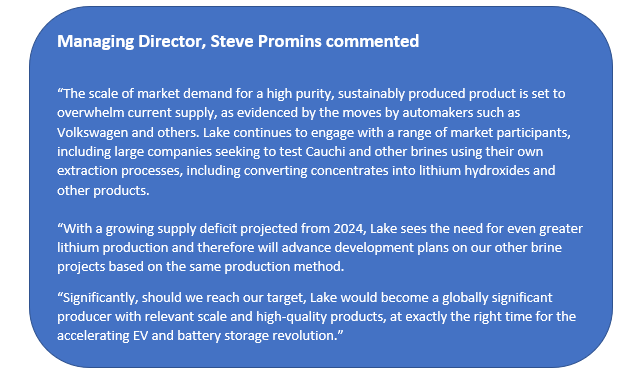