Meanwhile, KRR is also concentrating its efforts towards mini-pilot plant development and conducting more testwork, with an aim to leverage the robust economic potential of its proposed Kwinana HPA project, as demonstrated in the pre-feasibility study (PFS) released in mid-June 2021. 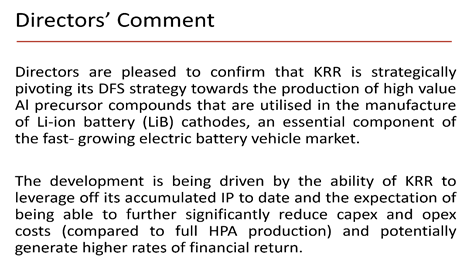 KRR is advancing the work on building a mini-pilot plant to demonstrate the large-scale viability of the ARC process for the DFS and produce batch marketing samples. While majority of the component parts have been delivered, some long-lead items are pending final product certification.

The compilation of mass, temperature and timing measurements from scaled-up laboratory tests is ongoing to help modify the design and address reagent and product handling issues.

Meanwhile, the Company has also kicked off sourcing detailed information on the various precursor needs from end-users. It plans to complete further investigations through international market agencies. 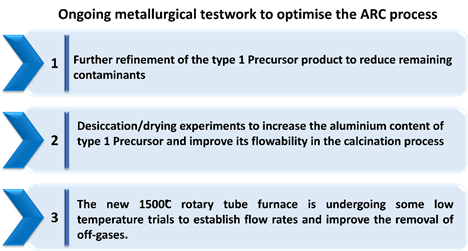 In addition, Como Engineers has also been commissioned for rescoping a modular process design for an initial precursor-only refinery.

Meanwhile, KRR targets P-CAMs with NCA and NCMA (nickel-cobalt-manganese-aluminium) chemistries, projected to dominate the LiB electric vehicle (EV) market by 2030. The Company intends to supply its precursor as the high purity aluminium source to this expanding market.

These aluminium precursor products are used in coating LiB cathodes and anodes, alternative aluminium sources for the P-CAM process, alternative coatings on LiB separators, and phosphors in LED lighting.

Given the robust commercial potential of bespoke HPA precursors, KRR will be considering opportunities to reduce the initial scale of the first commercial operation and thereby reduce capital and operating costs.

Moreover, outcomes from testwork programmes and studies would be used to decide on Stage 1, Type 1 Precursor-only operation with HPA production deferred to Stage 2, or other combinations of this exciting new opportunity.