Gold mining company, Kaiser Reef Limited (ASX:KAU) has announced initial drilling results for the current drilling program at the A1 gold Mine. The significant results received for the first batch of the drilling samples from the A1 gold mine includes 3.7 metres with 68.62 g/t gold.

The mining company believes that the high-grade results from the exploration program validates the past production of the A1 mine and reinforces confidence in the future of the mining operation. Kaiser has received a major head start towards the development of the future production plans. 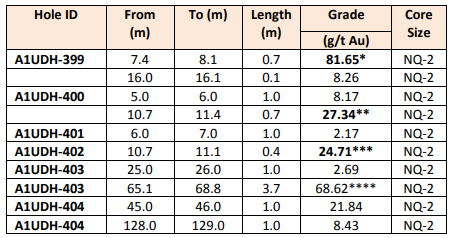 The initial drilling is only a section of the work planned to resume the decline and did not target the lodes of mineralisation. Therefore, it is extremely encouraging for Kaiser Reef and the newly acquired A1 gold mine that such significant results have been obtained from the drilling program.

The drilling program is planned to continue and upgrade the resource estimates for short- and medium-term production horizons. The initial program targets 4,000 metres to be drilled and as of now 80 metres have been drilled. However, the plans are general and will be subject to changes as results dictate.

Kaiser seeks to identify Queens Lode project as a priority for 2021 mechanised mining to supplement the high-grade narrow vein airleg mining supporting the mining operations. The results from the Queens Lode are still pending and will be released in future.

The current UG diamond drilling program includes multiple section of geotechnical/infrastructure advance, resource definition, advancement in infrastructure and exploration. The program will now advance to delineate resources especially at the Queens lode initially and will target deeper (150-300 metres) mineralisation targets beneath the deepest historical mine workings. The previous drill results from the Queens Lode includes:

The current exploration program will include 5 sub-program which represent the specific regions of the Queens Lode requiring infill drilling, strike extension, width / depth delineation and the identification of the plunge of high-grade mineralisation trends.

The bulk tonne/wider lode at Queens Lode may hold the potential to supplement or enhance the current production levels via air leg mining techniques which have been extracting the narrow vein high grade lodes. Any additional ores can be processed at the wholly owned Maldon processing plant which holds buffer capacity for processing the hold rich ores. The Maldon processing plant has a 150,000 tpa CIP capacity and hosts excellent existing infrastructure.

The A1 and Maldon projects have historically produced more than 2 million ounces of gold at exceptionally high grades. Kaiser Reef believes that the project has been limited exposed to modern exploration drilling techniques beneath the existing mining lodes and holds excellent potential for economic discoveries.

*All financial information pertains to Australian Dollars unless stated otherwise.