Continuing its good run, IOUpay Limited (ASX:IOU) has delivered yet another robust quarter on the back of accelerated uptake of its BNPL services. The March 2022 quarter marks IOUpay’s second consecutive quarter of positive adjusted net operational cashflow.

In a first, the fintech company reported Non-Performing Loans (NPL) during the period, as the portfolio was effectively built at the myIOU BNPL launch in mid-June 2021. The modest NPL reported evidences IOU’s strong credit quality control strategy.

Notably, the demand for its flagship BNPL service remains strong since the launch.  What’s more, the Company boosted its consumer and merchant base, launched revamped version of its BNPL offering, advanced key acquisitions, among many other significant developments.

Let us have a detailed view of the Company’s progress for the period ended 31 March 2022.

The increased uptake of BNPL service has resulted in elevated volumes of myIOU BNPL transactions.

IOU recorded written Total Transaction Value (TTV) of AU$23,137,657, delivering Net Transaction Revenues (NTR) of AU$1,615,662 on a financial YTD basis. The myIOU income margin for the 9 months to March 2022 stands at 7%, which is above expectations.

Growth in merchant and consumer base

IOU has been focusing on developing a community of quality merchants and consumers as part of its best-in-class brand positioning in South East Asia (SEA). The company has 2,000 merchant outlets that are system active on the myIOU platform and they span 13 industry verticals. Additionally, more than 1,900 signed agreements were yet to be assessed for activation, as at 31 March 2022. 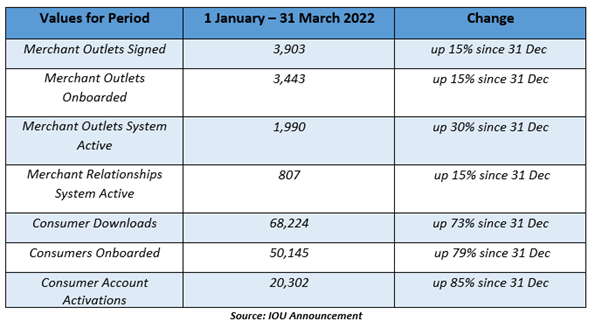 Notably, IOU has continued growth trend in consumer engagement, initially reported in November 2021, well into the March 2022 quarter. Consumer downloads during the quarter went up 73%, while consumer onboarding was up 79% and consumer account activation grew 85% as at 31 December 2021.

As integration, testing and rollout will be done in two phases – in the first phase, IOU anticipates the myIOU launch on SOGO’s point-of-sales platform by the end of June quarter. In the second phase, myIOU will be launched on SOGO’s e-commerce platform during the September quarter.

The quarter saw IOU approve 290 merchants for onboarding by RMS in its first two batches processed.  The merchants have now been confirmed as onboarded, and IOUpay has completed its merchant confirmation process.

Currently, the compilation of the third batch of merchants for review is underway. 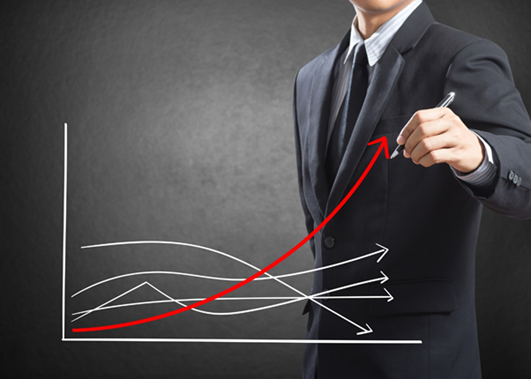 ALSO READ: What are key focus points on IOUpay’s (ASX:IOU) agenda for 2022?

IOU’s commercial activities with iPay88 (M) Sdn Bhd were delayed due to continuing negotiation of commercial terms and operational details. These negotiations have continued into April 2022, and IOU now anticipates resolving terms during the ongoing June quarter (Q4 FY22).

Once finalised, IOU plans to undertake systems integration and testing, which are expected to conclude during the December quarter (Q2 FY23).

One of the prominent highlights of the March quarter the launch of myIOU 2.0 – the revamped version of its flagship BNPL service. IOU introduced two new Brand Ambassadors, Priscilla Wong and Syafiq Kyle, to strategically support and promote myIOU 2.0

IOU confirmed that the first tranche payment of AU$21 million and the transfer of shares representing 21% of the total issued share capital of I.Destinasi Sdn Bhd (IDSB) to its wholly-owned subsidiary IOU Pay (Asia) Sdn Bhd had been effected.

During the March quarter, IOU received two dividend distributions from IDSB totalling ~AU$533,333.  The company will double its share of IDSB dividends once it settles the second tranche of the investment, expected during the June quarter.

In January 2022, the Malaysian Ministry of Housing and Local Government granted formal approval for the transfer of shares in SKM to IOU Pay (Asia) Sdn Bhd.

Earlier in 2021, the licence was an important commercial requirement when IOU’s BNPL business was being developed, as numerous payment gateway partners required the company to hold a money lending licence for them to enter into payment processing agreements.

IOU expects to witness continued growth in merchant and consumer acquisitions, backed by its relationships with quality partners.

With its comprehensive marketing and advertising campaign in progress, the company expects efficiency benefits through various technology enhancements.