Triggered by an exciting update at the Elizabeth Creek project, the shares of Torrens Mining Limited (ASX: TRN) skyrocketed ~97% on 9 June 2021 (AEST 2:38 PM).

The massive surge in the share price comes hot on the heels of a new drilling success – the intersection of a thick zone of IOCG mineralisation – at the Emmie Bluff Deeps prospect within the Elizabeth Creek Copper Project in South Australia.

Notably, Torrens, a gold and copper exploration company, holds a 30% JV interest in the Elizabeth Creek Copper Project, which sits within the heart of the Olympic Copper Province. 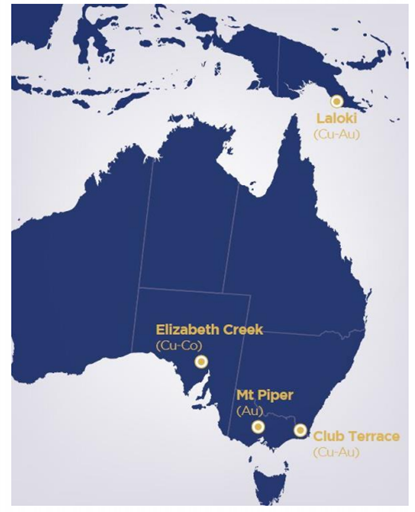 Pleased by the outcome, Torrens’ Mining Managing Director Steve Shedden commented that it was most heartening to receive an excellent result for the first joint venture drill hole for testing the IOCG mineralised system.

Elizabeth Creek, located within the most productive copper province of Australia, boasts the potential for discovering new sedimentary-hosted copper-cobalt deposits as well as Olympic Dam-style IOCG deposits. Mr Shedden stated that it is incredibly exciting to start witnessing the true value of the project emerge, given Torrens acquired the project back in 2015 for its strong growth potential.

The first deep diamond drill hole, DD21EB0018, was drilled vertically using a diamond drill rig from the surface and encountered locally typical Mesoproterozoic and Neoproterozoic sediments to a depth of 666-metre down-hole.

The drill hole intersected a geological unconformity at the point, below which it passed through a ~200-metre-thick zone of intense alteration and haematisation, including a 50-metre sequence of zoned copper sulphide mineralisation. The host-rock alteration assemblage encountered includes potassium feldspar, chlorite, baryte, and sericite, all typical of IOCG deposits in the region. In the immediate region, IOCG deposits of this type include the Oak Dam West discovery, which is ~16km north-east, and the Carrapateena Project, which is ~50km east.

The altered zone includes an approximately 58-metre zone of roughly complete replacement by haematite in a thick ‘cap’ of haematite in brecciated metasiltsone, which is interpreted as part of the Wandearah Formation. The presence of highly anomalous Lanthanum and Cerium, which are considered key pathfinder elements for IOCG systems, is suggested from the portable-XRF readings of the haematite cap material.

The copper sulphides exhibit zoning with depth below the haematite cap, consisting of:

The readings also confirm elevated copper associated with the sulphides in all of the three sulphide zones, along with the presence of IOCG indicator elements such as barium and cobalt.

Furthermore, intense alteration dominated by chlorite, potassium feldspar, sericite and silica is observed throughout the zones, as well as isolated baryte veins, which hint at the presence of IOCG alteration systems in the region.

The drill hole was terminated at a depth of 1,041.6 metres in unaltered granite. The core is currently undergoing final logging and assessment and will then be transported by road to Adelaide for cutting and sampling before submitting for assay.

Assay results are expected within 4-6 weeks, in light of the turnaround time at the assay laboratory. The drill core will be processed and assayed at the earliest opportunity.

An additional drill rig is being prepared to be mobilised to follow up on the significant result.

An Overview of Emmie Bluff Deeps

A geophysically-targeted IOCG prospect, Emmie Bluff Deeps is part of the Elizabeth Creek Copper Project. The current drilling program at the project, comprising two priority targets, was kicked off on 20 May 2021. These targets are: